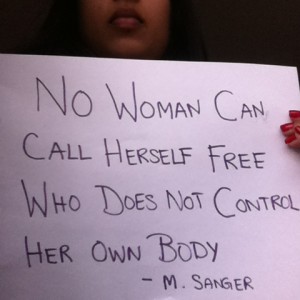 Messages like this are posted in solidarity at nbprochoice.tumblr.com

New Brunswick’s only private abortion facility will be closing by the end of July due to lack of funding. The Morgentaler Clinic announced the news last Thursday, April 10.

If this closure happens, women in New Brunswick, and some from P.E.I (who make up 10 percent of the clinic’s clientele) will have little choice when it comes to abortion. Since the clinic is private—that means not covered by Medicare—it does not have to follow the province’s restrictive regulations, stating two physicians must approve of the procedure deeming it “medically necessary,” and that the procedure must be done by an Ob/Gyn. Only two Moncton hospitals provide such abortion services.

According to the Morgentaler Clinic’s Change.org petition:

“The regulation also violates the Canada Health Act, which Health Canada has said mandates full funding of abortions at both clinics and hospitals. Over 60 percent of N.B. women needing abortions are forced to pay out of pocket for abortion care at the Morgentaler Clinic in Fredericton, because hospital access is inadequate.”

“Medically necessary” is defined, vaguely, in the Canada Health Act as: “medically necessary is that which is physician performed.” So really, it is up to a government, which, in N.B., isn’t exactly known to be pro-abortion rights. According to a press release from the clinic, when the facility was opened 20 years ago, the premier at the time, Frank McKenna said, “If Mr. Morgentaler tries to open a clinic in the province of New Brunswick, he’s going to get the fight of his life.”

Women must also be able to find doctors who are not anti-abortion—assuming all women have been able to acquire family doctors.

The Social Action Project’s petition has 9,638 signatures petitioning the New Brunswick government to fund their services.

The clinic’s procedure costs are $700 for under 14 weeks pregnant and $850 for pregnancies between 14 and 16 weeks. The clinic has never had enough to cover the costs, and subsidies were provided by Dr. Henry Morgentaler, who died last May. Clinic representatives told CBC, “In the past 10 years, the clinic has contributed over $105,400 to subsidize abortions for women unable to pay the full amount.”

After the clinic’s closure women of low socioeconomic status, single mothers, and students will be left alone to either have a child they are unable to care for or turn to unsafe procedures. Either that or pray they can meet the province’s current criteria to obtain access to a safe and timely abortion.