Selfies: vain, fun, a cry for help, empowering and currently -kind of- a cancer awareness and fundraising tool.  MacBook’s have Photo Booth and savvy cell phone owners purchase apps that allow cats to indulge in a good selfie. Toronto’s OCAD University is currently hosting a student exhibition – All By Myselfie – with the explanation, “the act of taking a selfie reveals the intrinsic human desire to understand oneself.” 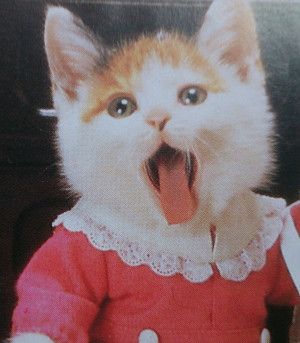 My selfie inspiration comes from my lifelong favourite book Busy Day with the Perlorian cats.

Currently a #nomakeupselfie campaign is going on in the social media world. Some say it originated as a breast cancer awareness campaign. CTV reports it started after, “author Laura Lippman tweeted a photo of herself without makeup in support of actress Kim Novak. The 81-year-old Novak had been criticized for her appearance while presenting an Oscar at this year’s Academy Awards.” According to this, a trend began and somehow got linked to cancer awareness so Cancer Research U.K. invited selfie snappers to donate for research with each post.

As someone who has lost their mother and grandmother to cancer, and who could have been up against the disease if not tested early, I’m happy the trend has raised money. However, I’m going to agree with blogger Yomi Adegoke when she pointed out the craze’s flaws in a radio interview: “If women not wearing makeup is deemed as brave when held against cancer, it does say quite a bit about society today,” she says. “I know the campaign was to normalize women not wearing makeup, but to suggest that by doing so is being exposing and leaving somebody vulnerable, that is problematic.”

Ladies usually don’t snap selfies when they are bare faced, they do it when they think they look good, usually synonymous with wearing at least some makeup. Social media being fairly new, if you look at the world’s history, etiquette has yet to be clearly defined. Selfies being a big deal in this world have brought up questions – is it vanity or a cry for help? Or, are they fun and give everyone the opportunity to feel like a model – a title little girls have been programmed to idolize for years. “I’m of the opinion that the concept of vanity is something we probably wouldn’t have if we didn’t live in a patriarchal society,” writes blogger Mel Reeve. Seeing that women have been trained to think it is wrong to be, or even appear to be, confident she wants to celebrate the selfie: “Our appearances are battlegrounds; we’re too fat, too thin, wearing too much make-up too obviously, too little clothing or not enough. Screw that.”

And then there is another opinion, like the one held by Jezebel contributor Erin Gloria Ryan, “Selfies aren’t empowering; they’re a high tech reflection of the fucked up way society teaches women that their most important quality is their physical attractiveness.”

Personally, I indulge in many a selfie. I like to dress up and I find it easier to socialize via social media. But I don’t think I need to justify why I do it with a social anxiety issue, it is my choice to take them. I am in charge of what goes out in the image-obsessed world, that represents who I am. And I can change it at any time. That is much progress from before when the only version of “me” was whatever pretty, skinny girl happened to be on TV at the time, playing a character my age despite being ten years older. They are fun not necessary.

But, maybe for others they are what Ryan calls a call for affirmation. Some may feel they need to prove their worth through looking good; this is sadly not a new concept. Again, social media is new. That’s why discussions over things as silly as selfies are being discussed.