This January, anti-feminist social media trolls have made headlines. Thought Catalog’s Chrissy Stockton wrote an anti-women’s life choices piece under the pen-name Amy Glass. In the U.K., two anti-feminists were jailed for their attacks via Twitter against high-profile feminist Caroline Criado-Perez. Social media anti-woman trolling isn’t new, but it seems to be getting more attention. The comments are usually the same; women are man-haters, sluts, bitches, cunts—such negative comments have become routine, as shown in the video An Open Letter to Feminist Trolls.

Lauren Rankin said it well in her June 19, 2013 post “Internet trolls love feminist writers”: “By and large, feminist activists don’t spend our days obsessing over what Men’s Rights Activists or anti-feminists write on the internet because we have our own work, our own issues, our own lives to worry about. We have more pressing matters, like the all-out assault on abortion rights, or the rampant sexual assault in the military, or the violence directed at the trans* community, or the enduring gender wage gap, just to name a few, that demand our attention and energy. There are real world issues that need to be dealt with, and instead, these trolls spend their days attacking feminists online. What an epic waste of time and energy.” 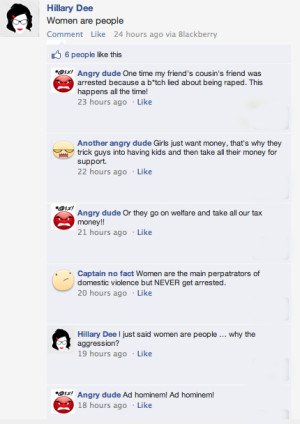 Internet trolls know their target’s pain points and how to trigger an emotional response.  Through the anonymity, or at least not having to see the face of who is being hurt, trolls have become rather popular, and such a nuisance—to be polite—that YouTube has enlisted Google+ to filter comments.

Trolls aren’t synonymous with online bullies, but they can become so. I’ve had comments on Facebook turn to comments on my blog, to personal messages. After being blocked they continued through texts and phone calls. This stuff gets scary. Then there is the lighter stuff —like a certain lovely blogger being told she is a man-hater with garbage writing. Or the more serious stuff like the Rehtaeh Parsons tragedy.

Other than suggesting to develop the ever-coveted thick-skin, there isn’t much a feminist can do when she’s trolled online—other than know she isn’t alone, even if it seems that way. This is remarkably unfair: advocating for women’s rights, shouldn’t have to come with an extra dose of name-calling and threats. And, perhaps the anonymous jerks out there won’t ever stop, but then again neither will feminists. As Lauren Rankin said, “We have more pressing matters”—and the courage to keep fighting.