Generally I think we are too quick to jump all over public figures for remarks they make —usually flippantly—that don’t jibe with our current understanding of sensitivity. It leads to a perpetually offended population where outrage, shock and condescending disappointment dominate the public discussion over what often amount to trivial matters. The endless string of apologies and “heartfelt” pleas for forgiveness by the offenders are equally tiresome. As if I’m sitting around, hands folded, waiting for a politician, celebrity or athlete to apologize for their latest transgression. I’ve got better things to do. I’m almost at the last level of Candy Crush.

All that being said, I’m now going to do that thing where I completely discount everything I wrote in the opening paragraph. That’s 30 seconds of your life you will never get back, and for that I sincerely, sincerely apologize. 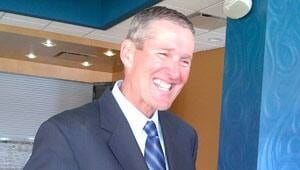 This is leader of the Progressive Conservative Party of Manitoba, Brian Pallister. You might remember him from the time in 2005 when he copped to “what’s known as a woman’s answer […] It’s a sort of fickle kind of thing.” When questioned about his dithering on future plans. He later apologized.

You may also remember the time Ol’ Brian “your pal” (imagined self-imposed nickname) Pallister, hilariously chided then CEO of the Royal Canadian Mint, Dave Dingwall, in the House of Commons with a delightfully clever, and by clever I mean incredibly lame, parody rendition of Pink Floyd’s “Another Brick in the Wall (Part 2).” He was responsible for these unforgettable lyrics:

“You don’t need no information,

we’re in charge of thought control,

fine wines with caviar in the backroom.”

And then his fellow Tories chimed in with:

All in all, it’s just another ding in the wall”

That was also in 2005, a banner year for Pallister, and song parody enthusiasts the world over. Anyways, all of that aside Pallister again said something incredibly stupid and this time on camera! In the video below he wishes “infidel atheists” a happy holidays, and then paternalistically adds, “I don’t know what you celebrate during the holiday season, I myself celebrate the birth of Christ…If you wish to celebrate nothing and get together with friends that’s good too.”

The contents of what he is saying is not particularly offensive to me. As an atheist, I wasn’t really looking for Brian Pallister’s go-ahead to celebrate the holidays. What is offensive to me is the condescending “pat on the head” he is giving to a group of people who don’t believe what he believes. Also particularly galling, is the internal struggle you’re witnessing of a man who seems to want to rage against the increasingly secular nature of Christmas (As in: We can’t even say Merry Christmas anymore! What is the world coming to!?!?!), but knows he can’t because he’s a politician.

I recognize that this is just an ignorant person not really knowing how to mask their ignorance. He’s trying his darndest to get his stupid thoughts from his brain, where it makes perfect sense, to the rest of us without coming across as stupid. The problem is he doesn’t have enough skill or cunning to pull it off. And yes Brian, I too know that infidel means non-believer, so while you weren’t crossing any strict definition lines, you purposely used a charged word to intensify your argument in favour of good, clean, Christian celebration of the holidays. Really, though, it would be as awful as me calling someone a faggot homosexual and then earnestly arguing that faggot technically means a bundle of sticks. But I know it’s a charged word and so did you, so no amount of saying “I respect your choice, all the best” is going to deflect from the molotov cocktail you lobbed two sentences earlier.