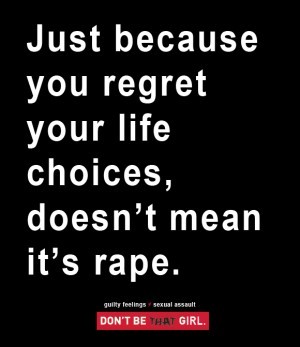 Both a Voice for Men (AVfM) and its sidekick organization Men’s Rights Edmonton deserve a WTF post of their own. The hate groups aren’t so much about men’s rights, like the name might suggest (because cis white hetero males have no rights whatsoever), as they are about hating women. One line in the Men’s Rights Edmonton blog, for instance, says feminists have abortions because pregnancy is inconvenient, while another says feminists have children to steal from taxpayers. Also, women have sex to trick men into getting them pregnant—because only women have access to birth control. These are cold, hard, MRA “facts”—so easily dismissed, you may never have wasted time on its misogyny-fuelled web presence.

However, recently Men’s Rights Edmonton started posting AVfM hate speech all over town. In response to Sexual Assault Voices of Edmonton’s (SAVE) three-year-old anti-rape campaign, called Don’t Be That Guy, AVfM made a similar styled rape-apologist, victim-blaming, slut-shaming campaign called, creatively, Don’t Be That Girl. The organization uses SAVE’s images, but with different slogans. Instead of the picture with a girl holding a drink and the caption, “Doesn’t mean she wants sex. Sex without consent = sexual assault,” the group has used, “Just because you regret a one night stand doesn’t mean it wasn’t consensual.”

Thankfully, those posters are now gone. In an e-mail, professor and the chair of Women’s and Gender Studies at the University of Alberta Dr. Lise Gotell says she never saw the posters herself outside of social media, though she later learned they went up over the weekend of July 6. The University of Alberta Protective Services contacted her after someone spotted them on campus July 9. The posters were taken down around campus, as per University regulations.

AVfM seems to be shocked it is being brought to court for copyright infringement—even though that’s arguably what it did. A July 14 AVfM post reads, “On July 11th, A Voice for Men received an email from a law firm claiming to represent a noxious hate group in the Edmonton, Alberta area of Canada calling themselves Sexual Assault Voices of Edmonton.”

If the group was really about human rights, like they claim, those behind it wouldn’t be so offended by the notion of a message saying, “Don’t rape women.” Their argument is that women lie about being raped more than they actually are—because, apparently, it is so great living as a rape victim. I think members also want to bring light to male rape victims but it is hard to figure out through both sites. All I really see in the messaging is: women are evil and ruining the world.

“’I was sexual assault detective for four and a half years and in that time I only dealt with one, and I dealt with numerous files. Many, many, many files,” acting Insp. Sean Armstrong from the serious crimes branch of Edmonton Police told CBC.

And yes, sincerely heartbreakingly, males do get raped. Statistics shared by the Rape Victims Support Network says one in four girls, and one in eight boys, are sexually abused by the age of eighteen. Instead of wasting efforts on creating rape apologies, though, the male rights groups’ energy could be better spent on campaigns urging males to report rape. Or looking into why people think male rape in prison is so funny when it is beyond terrible. There are issues that need the focus but sadly, MRA groups seem to prefer trolling feminist blogs, lumping all different feminist types together, and bashing them by making fun of women’s physical appearances, or their assumptions of such, like how we all wear army boots.

The reason there is so much focus on sexual assault against women is because, statistically, such things happen more often to them. Every 17 minutes a woman is raped in Canada. Out of every 17 Canadian women, one has been raped at least once in her lifetime; the most likely victims are 15–24 years old. The SAVE campaign did not demonize men; in fact it welcomed men into the discussion. It didn’t say males don’t get raped or that all men rape. AVfM showing a picture of a woman Nazi doesn’t prove anything. (Side note: why is Nazi even a colloquial term? A stickler for good grammar is in no way the same as the evil carried out by those monsters.)

A Men’s Right’s Edmonton blog post from June 29 says (in one giant sic), “Seems to me, if our message was so distorted, and our arguments so weak (as feminists continually say they are), feminists wouldn’t try so hard to make sure nobody even has a chance to see them. & by the way, ripping down our posters only broadcasts to the world your fear of our message, so we will happily continue putting more up.”

Ideally, the continuation of the posters will only serve to prove why few take the group’s  message seriously. However, as Dr. Gotell says, “I am most concerned about the integrity of the Don’t Be THAT Guy campaign and about how the altered posters may dissuade police reporting.”