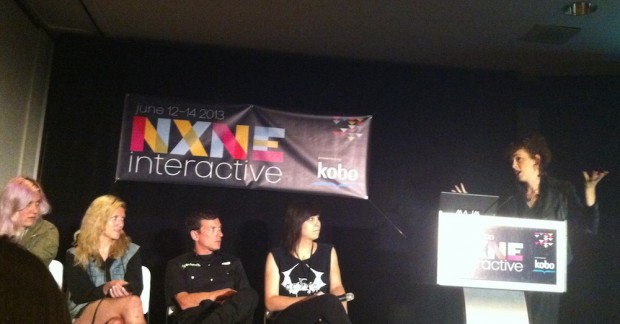 It probably comes as no surprise that an audience for a discussion about women and music would be filled with, well, women. Such was the case in mid-June when Melissa Auf der Maur led a thoughtful conversation at Toronto’s NXNE festival titled “Women in Music: More Than Ever Before.”

Auf der Maur was joined by Yamantaka // Sonic Titan drummer Alaska B. and Jasamine White-Gluz and Laura Lloyd from Montreal shoegazers No Joy. As the only dude on the panel, Toronto Star music writer Ben Rayner rose to the challenge, adding thoughtful responses as a media insider (apparently, many journalists still think it’s amazing that women can play the drums and that it’s OK to waste your story lead describing the various comely attributes of a female singer).

Wearing a cherished Isis talisman around her neck, Auf der Maur came at the subject with positive energy, taking cues from a blog post she wrote for the Huffington Post stating: “Original, talented, independent and self-reliant, women are in the forefront of music today.”

And yet all three original, talented, independent women on the panel shared stories of gender bias, which I’m sure comes as no surprise to anyone, either (read Steph Guthrie’s blog post for a round-up of shit guys say to women musicians). In particular, Alaska B., who as a mixed-race trans woman in a radical (Polaris Prize–nominated!) band, says she feels like an outsider, “whichever way I turn,” describing how her first band in the Montreal punk scene used to receive death threats. It’s frightening that any artist should ever have to face that situation.

Perhaps not wanting to ruin Auf der Maur’s happy vibe, the panelists seemed to shrug  it all off as an occupational hazard, preferring instead to focus discussion on the music itself.

But what happens if your songs aren’t being heard?

Many of my women musician friends (and some members of the NXNE audience that day), have expressed frustrations with the lack of representation in music media and at festivals. Having sat on many juries, I know how the process goes, and I don’t think I’ve ever heard an organizer express concern that there are too many bros on stage.

So what can be done? Self-governing seems to work for literature. This week, Canadian Women in the Literary Arts released their second count of gender trends in Canadian book reviewing. The good news is that there are more women authors being reviewed and more women critics doing the reviews than last year when CWILA first pointed out some of the egregious gaps. It’s hard to say what really motivated some editors to examine the issue (Shame? Ego? Competitiveness? Or an honest attempt to correct the issue?), but as a first step, it seems to be effective.

Imagine if someone were to take on a gender count of reviews (and reviewers) in Canadian music publications, or tracked the number of women bands that appeared at festivals over the course of a year. Of course it doesn’t change the systemic reasons behind the bias, but maybe a few more people would get a chance to hear music created by women. And more women would get paid to play music. And be selected for prize shortlists. And maybe after a few rounds of this we won’t need any more panels telling us how far we’ve come.