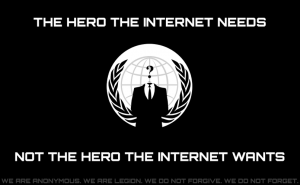 But first, let me back up. Over the weekend, Anonymous launched a public war on Moore, saying that his actions have gone far enough and he must be stopped once and for all. Anonymous specifically took issue with Moore’s intention to publish the personal information of people who wrong him. “We will protect anyone who is victimised by abuse of our internet, we will prevent the stalking, rape, and possible murders as by-product of his sites,” the collective said in a media release. “Operation anti-bully. Operation hunt Hunter engaged. We are Anonymous, we are legion, we do not forgive, we do not forget, Hunter Moore, expect us.”

Fast forward to early yesterday morning, Anonymous claims they hacked into Moore’s newest online venture, huntermoore.tv, and subsequently published a ton of his own personal information online. They’ve even put it a downloadable file, archived so that Moore can never erase the data. Whoa. 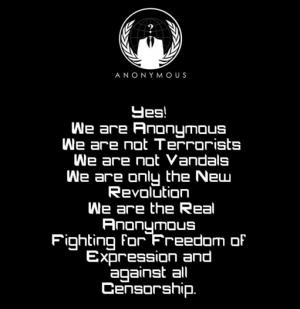 Good on Anonymous for publicly declaring a vendetta against Moore. It’s about time someone took him on in this way, challenging the actual foundation of his website instead of just the pillars that hold it upright. It probably takes a group as powerful and web-savvy as Anonymous to really be able to fight an even fight with Moore, and for that, I commend them. That being said, I’m not entirely sure how I feel about Anonymous publishing all of Moore’s personal information. I mean, I get it: It’s revenge. Moore gets off on doing this to other people, so it can fairly be done back to him. He should be able to swallow a dose—or a whole bottle—of his own medicine. But I’m still not sure it’s entirely right; taking down his site is one thing, but hurting him the way he’s hurt others is another. After all, fighting fire with fire really only creates a bigger flame.

Then again, as Moore himself said, it’s all about getting “the information out.”