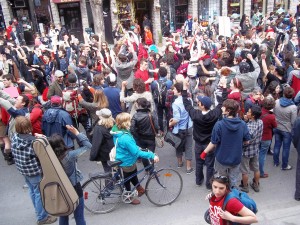 The student strike in Quebec does not look to be ending anytime soon. While a tentative agreement was struck on May 6, following a 22-hour negotiation between the students and the Quebec government, it will likely be annulled after the 150,000 students around the province vote this week.

If the agreement is passed, it would maintain the proposed tuition hikes of $254 a year, over the next seven years. In return, the government offered an equivalent reduction in the mandatory university surcharges and administration fees. These fees cover non-academic services.

In other words, the cost for attending post secondary in Quebec would not change—some numbers will go up and others will go down under the proposed agreement, but the sum total students will pay for their education post-hike will be equivalent to the current cost. It’s hard to say if there is a clear winner in the end.

As the student strike lingers into its third month, the end date is still unclear.  Gabriel Nadeau-Dubois, who has become the face of the protest and leader of the Coalilition Large d’Association pour une Solidarité Syndicale Étudiante (better known to the public as CLASSE), spoke with the Globe and Mail (http://www.theglobeandmail.com/news/politics/face-of-quebecs-student-protest-surprised-by-its-power/article2425572/) Monday regarding the tentative agreement. “The trend seems to indicate that it will be rejected. We will have to evaluate the situation after all the votes are taken,” said the 21 year-old history major at the University of Quebec in Montreal. “What is clear is that the strike would continue and we would return to the bargaining table to discuss the central issue, which is the tuition fee hikes.”

At this point only one school, CEGEP de Gaspésie, has accepted the offer. Five Collèges d’Enseignement Général et Professionnel (CEGEP) have voted against it and seven university departments.

The ongoing protest has seen its scope broaden in recent weeks. “The tuition fee hikes have quickly channeled a great deal of satisfaction towards the government, about accessibility to higher education and other social issues,” Nadeau-Dubois told Rheal Seguin.

This past weekend 3000 protesters ascended on a Liberal Party meeting in Victoriaville. The protest turned violent and sent three students to the hospital with serious injuries. To me, it seems students are becoming more unruly and it is imperative that some kind of resolution is found—or there is potential for the violence to escalate even further.

Within all of the madness which surrounds any type of protest of this magnitude there is one group which is routinely ignored by both sides. André Poulin, executive director for a group of about 800 downtown businesses in Montreal, spoke with a National Post (http://fullcomment.nationalpost.com/2012/05/07/graeme-hamilton-quebec-student-deal-is-far-from-settled/) reporter about the problems they are facing.

“They don’t realize the damage they are causing to people who earn a living operating these businesses,” Poulin told the Post. “Even if there is no violence businesses are affected.”

This is probably the part that most infuriates me: The innocent people caught in the middle. I’m all for a civilized peaceful protest, but when individuals start destroying store fronts, it hurts everyone. Many people have been avoiding the central area of the protest, resulting in loss of business and tourism. Like most downtown cores throughout Canada, many of the businesses are independently owned and operated. Also if these tuition hikes are implemented, many of these students will likely turn to these exact businesses for employment, to help pay for the rising tuition costs.  It essentially gives the whole movement a bad rap; people start talking about the way protesters are acting instead of the issues they are protesting around. If we want to gain the support of people outside of universities and colleges, it’s important to consider public image. And it seems as though it has been tarnished.

I think this whole movement will have implications beyond the educational realm. One interesting fact to note is that the idea for the current tentative agreement was initially proposed by former leader of the Bloc, Giles Duceppe. On top of this, the Bloc has claimed they would abolish tuition hikes if elected.  With the next provincial election slated to happen by the end of the year, quite possibly this summer, the youth vote could actually help slide the Bloc back into the forefront of Quebec politics, a position which has diminished over the past few elections.