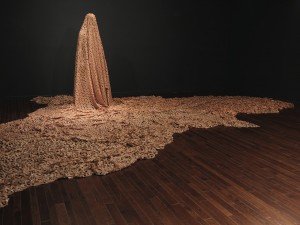 Imagine 60,000 Band-Aids stuck together in small wagon-wheel patterns, draped over a mannequin in an art gallery. Now, imagine a person wearing this cloak in the middle of a downtown street, who if feeling confrontational, sticks Band-Aids on passersby.

Hamilton-based artist Andrew McPhail’s installation and performance all my little failures explores obsession, humour and disease. Most recently presented at the Textile Museum of Canada in Toronto, his Band-Aid cloak was included as part of Veiled, a group show that examined the act of covering the body.

“In a gallery there’s a level of distancing, you know how you are supposed to respond,” says McPhail. “When you are confronted on the street wearing it, you don’t have any context for it. I get a lot of very different kinds of reactions.”

McPhail says strangers often mistake him for a woman because of his diminutive height, but his hairy legs draw suspicion. “I don’t speak when I am wearing it. No voice cues,” he says. “This unbalances people.”

For the past four years, McPhail has purchased all his Band-Aids at the local drugstore. Cashiers rarely question why he requires so many peel-and-stick patches; they just keep replenishing stock. “Band-Aids are about healing and also covering up, covering the wound,” he says. “Covering it ineffectively. People use ‘Band-Aid solution’ for the short term, for a solution that doesn’t really solve anything.”

McPhail’s obsessive assemblage of first-aid staples creates an almost flesh-like veil. Part manifestation, part conversation, all of my little failures is also a point of entry into the artist’s struggle with HIV, which he’s been living with since 1993.

“It’s so overwhelmingly sad that it’s funny, I thought,” he says. “Without seeing the piece in action it’s harder. Just seeing it as an artifact it’s hard to get the weird humour of it.”

Textile Museum of Canada curator Sarah Quinton views the piece as a balance of humours, straddling both the nature of veiling and unveiling.

“The flesh-like physicality of the Band-Aids suggests matters of healing, touch, protection and futility,” says Quinton. “The labour-intensive patchwork of this veil or shroud, consumed with precious and limited time, forms a protective space for the wearer. The lacy perforations, however, render it permeable to the outside world, displaying the impossibility of separating public and private realities.”

When he’s not stringing Band-Aids together, McPhail’s working on Cry Baby, a piece made of over 2,000 hand-stitched Kleenex, inspired by when he was on a flight and the passenger beside him died of a heart attack. McPhail folded an airplane out of snot-rags he wet with artificial tears to suspend over a pile of fluffy tissues on the gallery floor.

“It’s about the overwhelming nature of grief,” he says. “There is the flip side to dealing with really overwhelming emotions without blame or self-shame, they are so hard to face. If it takes 60,000 Band-Aids, I’ll keep it together.”