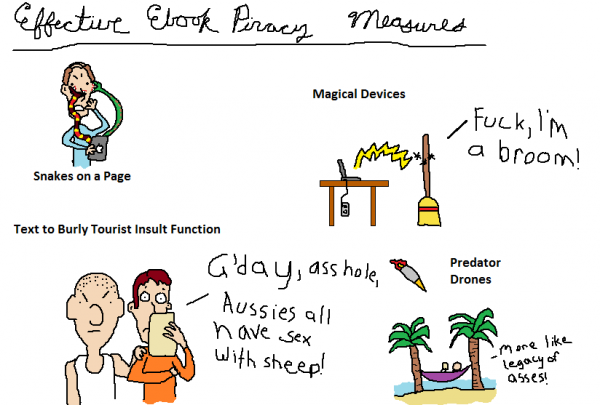 The words “book” and “fan” don’t really fit. Music and fan, sure. Sports and fan, you bet. But when it comes to books, you’re a reader or a lover, rarely a fan. Maybe it’s because fandom has little place in an industry infamous for its cynicism and curmudgeonly attitude, its scything insults and ivory tower. Or maybe it’s because the word suggests an uncritical appreciation that doesn’t quite match up to the way we feel we should appreciate books. Imagine calling yourself a fan of Borges. It just doesn’t fly. When it comes to books, “fan” falls flat.

Enter Book Madam & Associates, professional book fans. Based in Toronto, with outposts in Vancouver, Montreal, and Halifax, BM&A are professional appreciators—not critics or influencers, just people who really, really like books and the publishing industry. They spread their appreciation through blogs, tweets, and occasional podcasts, events, DJ playlists, and online comics clumsily drawn in Microsoft Paint.

Julie Wilson, a.k.a. the Book Madam, describes the group as a bunch of enthusiastic lateral thinkers: “We have a wide range of interests, along with a desire to connect people across those interests.” They’re what you could call enablers, fuelled by the underlying belief that people want to connect to books, but often don’t know how, and that there’s an ever-growing list of media tools that can enable this connection.

Wilson started on the road to professional fandom in 2006 with her blog Seen Reading, which she describes as an “esoteric spy journal.” On the blog, Wilson logged what she saw commuters reading while in transit. Each entry includes the location of the spotting, a description of the reader, the book being read, the passage Wilson imagines the person is reading, and her riff on that excerpt.

In The Human Body we learned a little about all the tubes you’ve got inside you— Fallopian tubes and whatever, all those tubes like canals and rivers carrying stuff back and forth around your vagina, or wang—depending on what you’ve got. And right then, right when I’m thinking that—I swear—the clouds break up a bit and even though she’s gone so tiny Mom the moon comes smiling down into the water at the bottom of the hole, lighting the puddle up silver.

The muted voice offers gentle guidance from behind an inch of hollow door, all that separates this embarrassing and gymnastic feat from the perfumed cheek of the woman who bore her. She sits defeated on the toilet, applicator in hand, and calls her mother in.

Since 2006, Wilson has logged more than 800 entries: a curly-haired woman wearing a white backpack reading Breakfast at Tiffany’s by Truman Capote; a Hispanic teenager reading Unbearable Lightness by Portia de Rossi; a black man in his fifties wearing a forest-green sweater reading A Journey to the Center of the Earth by Jules Verne. Recently, Seen Reading went global via Twitter, gathering sightings reported by literary voyeurs in Thunder Bay, Winnipeg, Halifax, and Singapore, and in spring 2012, Calgary-based Freehand Books will publish a book based on the project.

Wilson sees Seen Reading as “an impressive, open-ended display of anecdotal evidence that proves people still read, still read paper books, still read in public as entertainment.” She’s made influencers of readers who, though they may not know it, are producing culture through the act of reading. Considering the publishing industry’s current troubles, BM&A’s unflagging enthusiasm is heartening. A new returns policy instituted by Indigo Books & Music will soon see Canada’s largest retail book chain sending books back to publishers 45 days after they’ve been ordered, slicing in half the long-standing 90-day returns term. That means some books will have only a month and a half to make an impact on readers, an impossibly small window in a very busy season. Some larger publishers, like McClelland & Stewart, who just released Michael Ondaatje’s new novel, The Cat’s Table, have less to worry about. Others, whose fall lists centre on newer voices, may have more of an uphill battle.

“In all your other relationships you’d practice more care, but publishing you truly can’t ever stop trying,” says Wilson of book marketing today. “You’ll turn that book into whatever you think the reader wants: ‘You want a blonde? I can be a blonde!’” As bricksand-mortar bookshelves disappear, some advocate for a re-emphasis on book criticism as a way to keep the conversation going. The reality, though, is that the space available for book reviews in major media outlets doesn’t allow for the considered criticism the New York Times Magazine’s Sam Anderson refers to as the “ground zero of textuality.”

The idea of a professional fan may not jibe with notions of how we receive books. But in building a book community that explores the manifold ways people interact with books, BM&A is doing readers and the publishing industry a great service, reinvigorating the lives books have off the shelf.

Another way Wilson is accomplishing this is through work with the Canadian Bookshelf project, a government-funded database of Canadian books. Its goal is to build community around Canadian titles through customized portals aimed at the general public, film and television producers, teachers and librarians. Wilson blogs about books and authors, and runs a personal-shopper program that matches readers with books based on five self-submitted descriptors, filling the gap left as more curated independent bookstores disappear. The realm of professional book fan keeps growing.

Five books you may see Book Madam reading this fall:

Autobiography of a Childhood by Sina Queyras (Coach House Books)