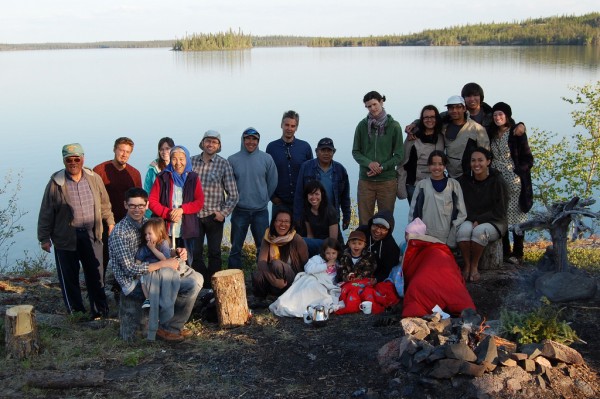 Back in the 1960s, a group of high-minded northern and southern Canadians had a collective revelation: if the North ever wanted to succeed, it desperately needed a university. Toronto-based lawyer and retired Air Force general Richard Rohmer spearheaded the idea, first lobbying locals and politicians, and later penning a draft for a bricks-and-mortar institution. While the resulting plan led to the creation of colleges in all three territories, 50 years later all that is left of the University of Northern Canada is a couple of failed proposals, a worsening brain drain to the south, and an acute need for higher education and trained professionals in a booming region.

Dechinta Bush University Centre for Research and Learning is looking to change all that. Its goal: to provide a post-secondary liberal arts education to northerners at home. Founded in 2009, the aboriginal-run centre offers five courses in a 12-week semester, combining academic standards with indigenous knowledge to offer a comprehensive look at northern politics and land preservation.

“Living off the land and the land-based approaches are really integral to all the courses we deliver,” says Kyla Kakfwi Scott, program manager for Dechinta. In learning and using land-based practices, she adds, students come to understand the material being taught through the academic portions of the course.

Subjects covered include the history of self-determination of the Dene First Nations, decolonization practices, writing and communications, environmental sustainability, and community health, with undergraduate credit granted through the University of Alberta. Each course is taught by academics from the north and south and cultural experts, such as resident elders and guest lecturers.

Each term, up to 25 students, aboriginal and non-aboriginal, northerners and southerners, recent high school graduates to retirees, kick off courses by spending five weeks at home working through assigned readings. After that, they travel by plane to Blachford Lake Lodge, located about 220 kilometres east of Yellowknife, NWT, where classes are held outdoors. While not a degree-granting institution, the bush university is expanding to host one master’s and one PhD student per year who want to do research based out of the Dechinta program, with the goal of having their own masters programming down the road.

“The North has a lot of really interesting insight and expertise to offer, not just to its own residents but to people from around the world,” says Kakfwi Scott. “But for northern people the idea of being able to stay close to home and learn about the things that you’re dealing with every day and have that be recognized as being valuable and teachable at home would be phenomenal.”