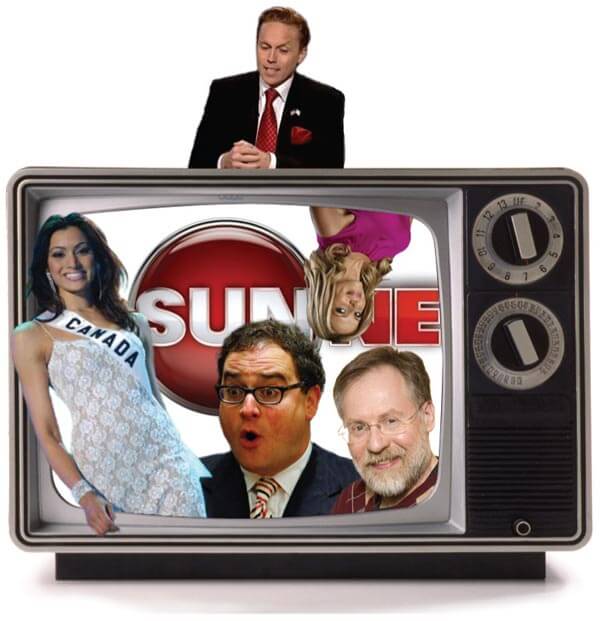 4:00 PM The Caldwell Account with host Theo Caldwell. Ten seconds in and there’s a veiled reference to ladies being gentler creatures, free from the oppressive bonds of thinkin’ and carin’ ’bout heavy stuff that matters. I begin jotting a tally of such events, and loosen my bustle so I don’t get the vapours.

4:08 PM Tiny, WASPy fellow sits behind a too-large desk burping sorta-ideas into the ether while people wandering into the background agree with him. Folksy phrases abound: “You know what really fries my ham?” Boy howdy! “Go pound sand!” Darn tootin’! Then he calls all Saudis “nefarious.” (Shortly after this experiment, The Caldwell Account was cancelled. Based on this observation, it is not missed.)

5:06 PM Preston Manning is a guest! I forgot that he sounds like a sad duck.

5:09 PM But don’t be a sad duck, Preston Manning! You have your very own think tank now. And according to that think tank, Canada is becoming more conservative. Just ask the 1,000 elderly people who actually pick up their landline telephones whom Preston Manning called and asked.

5:11 PM Host Charles Adler (his show is called Charles Adler) keeps calling Manning by his full name. Maybe he doesn’t know what title to give him, so it’s safest to just say the whole thing. That, or Manning requested it. Both of these ideas please me.

5:17 PM A commercial: a bunch of hot female Sun News Network anchorbabes. One says, “Finally, a news channel that lets me be me.” There we go again, us womens, confusing our news broadcasts with our tampons.

5:23 PM Joy Tiz—author of Obamanutz! A Cult Leader Takes the White House—comes on to discuss the scandalous underwear photography of congressman Anthony Weiner, and how the Democratic Party refuses to do anything about it (except, you know, call for an investigation. Boring!). She joins Adler “via Skype.” Take that, lamestream telephony! A little Googling reveals that Obamanutz! is self-published and includes 100 percent more zeds than necessary. Her website also notes (on the front page!) that she is the owner of “three magnificent and staunchly conservative German shepherds.”

6:04 PM Bryan Lilley hosts Byline. Finally, someone to make me genuinely mad rather than drowsily irritated. This hour, I will think and write the word “obfuscate” approximately once per minute, e.g., when Lilley uses the postal lockout to try to illustrate how unions are forcing their employees to support “radical organizations.”

6:10 PM A swoopy graphic of money going down a drain with the CBC logo on it!

6:34 PM Former Stephen Harper chief of staff Guy Giorno asserts that politics is not about left or right, or parties, but who stands up for “ordinary Canadians who don’t pick up placards and protest, they’re too busy working and taking care of their families.”

6:42 PM According to this guest, whose credentials are unclear, the CBC is “atrophying money.” I think he means hemorrhaging. Also, he notes the CBC cut $30 million from its budget the previous year, so perhaps “atrophying” is exactly what he meant? More wine.

6:47 PM Brian Rushfeldt of Canada Family Action says TV is all left-wing propaganda. “Manipulation of emotions is what television does,” he says—and lo, a dictionary doth populate the word “irony.” The lefty TV shows referred to are Friends and Sesame Street. Never forget: A is for Abortion, B is for Bolshevik, C is for CBC.

7:00 PM Here it comes! The Source with Ezra Levant! Finally, the show I’ve been waiting for—Canada’s answer to Glenn Beck! He of the theatrics! And… he’s off tonight. Instead, please enjoy this dour substitute, who delivers a 15-minute rant about squeegee kids and panhandlers who wait to terrorize your shiny car with dirty water and crudely written signs.

8:14 PM In this neat little advertorial, Charles Adler is actually shilling a product sitting at the same desk from which he broadcasts his show. It’s some sort of nutritional supplement. Let’s all take it! With wine. After all, you have nothing to lose, since the next three hours will all be repeats of the shows you just watched.

9ISH A commercial advertising Sun News Network: “We’re out there. Far out there. Beyond the reach of the television police.”

10ISH More repeats. By the way, where are all the hot chicks “being themselves”? Have not seen even one sexy anchor getting down with her neo-liberal self.

MIDNIGHT OR THEREABOUTS I am done. And glad. So glad. Thank the TV gods that we are so bad at this—this making of polemics, this dividing of loyalties, this unpacking of prejudices masquerading as argument. We, as a nation, appear mercifully ill-suited to the task.

CONCLUSIONS Be unafraid of Sun News Network, lefty elites: there is so little there there. Was watching Sun TV News funny? At times. But mostly it was a little sad, a little pitiful. Sound and fury signifying … not nothing, but worse—just more sound and fury. A sad duck eating its own tail.