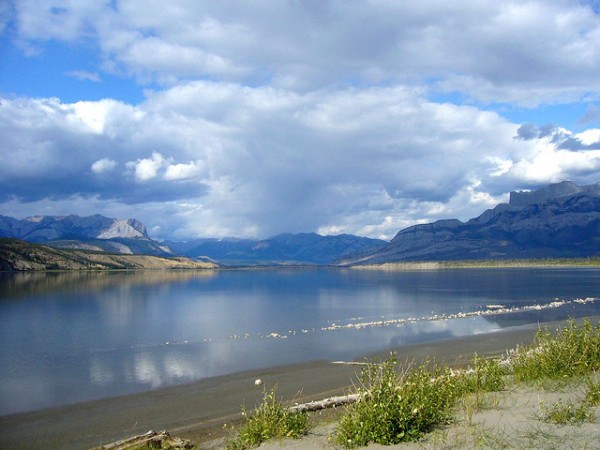 Don't you want your oil to come from a beautiful place like this? Creative Commons photo by Flickr user Medmoiselle T

The “ethical oil” campaign is at it again, trying to convince consumers that by supporting tar sands production, they are saving the world from those scary Saudi women-haters. But this time, they have gone so far in appropriating the language the left, I actually thought the ads were spoofs.

Without batting an eyelash, these ads attempt to appeal to the consumer’s environmental conscience. Showing beautiful Canadian landscapes compared to a barren Saudi desert, this ad asks “which environment do you want your oil to come from?” Ahem, do I actually have to point out that tar sands production produces 4 times the amount of greenhouse gases as Saudi oil extraction and that the beautiful lake shown won’t be so sparkly after its use for storage of toxic tailings?

The Guardian also criticizes the campaign, displaying the ads in this article that show how ethically superior Canada is because we employ aboriginal people in the tar sands … Yay? Maybe in the fine print they mention that these oil sands have poisoned the indigenous community of Fort Chipewyan, living downstream on the Athabasca River. With sky high cancer rates from a bitumen contaminated water source, those “good jobs” must come with a hell of a health insurance plan.

The ads’ tagline is “Ethical oil. A choice we have to make.” Do we? I don’t remember the last time my choices at the pump were bronze, silver, gold, and Canadian. I have an inkling that these brazen co-options of homosexuality, feminism, and environmentalism are a clumsy attempt to garner public support in lieu of growing national and international discontent at the tar sands‘ disastrous environmental track record and unabashed plans for increased production.

The latest uproar is the legal action against these ads by the Saudi government, causing the ad to be taken off the air at CTV. I know Sun TV’s Ezra Levant facilitated the birth of the ethical oil campaign, but to see him donning a feminist facade in this rant is a little much.

The contrast these ads try to make is infantile and overly simplistic, if not entirely false. But obviously, Levant disagrees. He assures viewers that the information is 100% true, as “the ad actually footnotes where the information comes from.”

Damn it Levant, you got me again.