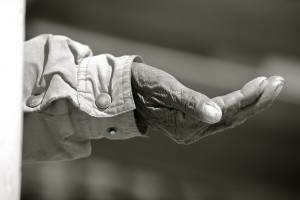 By Mary Dirmeitis and Megan Harris

You’re walking down the street when you see a panhandler on the sidewalk, holding out a cup for passersby to give change. You can feel the loonie in your pocket left over from the coffee you bought earlier — but do you give it to the person?

If you live in a major city, or even if you don’t, you’ve likely been in this situation before. The dialogue runs through your head. If you do give up your money, what will the person spend it on? Will they use it to buy something helpful for themselves, like food, or will they use it to feed an addiction? And then your personal debate goes further. Do you have a right to judge how another individual spends their money? Are you only giving to appease your own guilt?

It’s something we think about, and feel conflicted about, and so we talked to organizations who work with street-involved people to get their take on the ethics of giving change. We asked their views on the effects of donating directly to individuals, and how people can best use their limited dollars.

Matthew Pearce, Director General of The Old Brewery Mission in Montreal, says that if you think that you’re doing your bit to help homelessness by donating money to panhandlers, you’re wrong. Small change or daily necessities such as food or clothing may benefit a homeless person temporarily, but it keeps them in their current situation.

“Instead of giving that money, collect it over a little while and make a donation to an organization that provides real services to the homeless, not just food and lodging.” says Pearce. “Most [organizations] now, such as The Old Brewery Mission, have counseling programs to get people off the street.”

With the plethora of organizations across Canada, Pearce says that the people you see panhandling do not need money for food because there are shelters that provide that.

Seren Gagne, a youth support worker at Resource Assistance for Youth (RaY) in Winnipeg, says that homeless youth will seek money to support a drug or alcohol habit, whether we give to them or not. Gagne therefore supports panhandling as an ethical way of getting money.

“Let’s say you’re a drug addict. What are you going to do?” said Gagne. “Are you going to panhandle? That’s a pretty safe way of getting money. What are the other options? Sell drugs, sell your body, assault someone. If you’re going to do that anyway, I don’t think panhandling is that much of a problem. Essentially it’s harm reduction. They’re squeegeeing [a car] or panhandling, instead of committing a crime or possibly selling their bodies.”

Although a correlation between addiction and homelessness does exist, some members of the public do not want to hand over change that might support a bad habit. Others feel that homeless people, as adults, are entitled to make their own decisions about how they live and what they do. Some prefer not to give money, but will hand over food or some other helpful item.

Myron Krause speaks about how gifts — a backpack, say, or a toque — address a short-term need, but do not contribute to eradicating the root causes of poverty. As Executive Director of The Mustard Seed, a non-profit organization committed to addressing the root causes of the the homelessness epidemic in Calgary, Krause sees a lack of safe, affordable housing as the most serious issue.

“When rents start at $800 and up just for a basement suite or one-room apartment, it’s not accessible for a lot of people,” said Krause. “So [with regards to] panhandling, the money we give is probably not going to address the need for people to be able to afford their rent. But we as an organization can use that money to try and create affordable housing and that’s what we’re doing.”

A more valuable thing to do could be to donate your time — for instance, serving at a soup kitchen or volunteering at a shelter. That way, you can see direct results of your work.

“It’s great to volunteer your time,” said Gagne. “That’s better, that’s doing more for yourself, and doing more for other people. You’re not just simply doing the act of handing out money, you’re taking the time to really get to know these people and maybe interact with them on a personal level.”

Pearce believes that confronting the roots of homelessness is the most valuable act.

“It’s hard to see a positive effect [of panhandling] except that it is an opportunity for people in the city to come face to face with homelessness,” said Pearce. “And they have an option then to give money or not. They also have the option to show the person a little bit of respect, look them in the eye, show them they exist. The life of homelessness is a life of exclusion, you always feel on the fringes, you always feel like you’re almost invisible.”

Pearce also spoke about the concept of donating respect. Even if you don’t want to give the change in your pocket, or if you have none to give, look the person in the eye and tell them that. And then wish them a good day and move on.

Giving comes in all forms, whether it’s a small donation, a personalized budget, or necessities for life on the street. And the decision to engage in this transaction is ultimately a personal one. However, the causes for poverty and homelessness are vast and complex, and there are countless organizations to contribute to who have made it their mission to address these causes and eradicate homelessness for good.

Above all, Pearce also says people should not give up hope in regards to helping the homeless. “Keep going,” Pearce said, “Because it will change.”