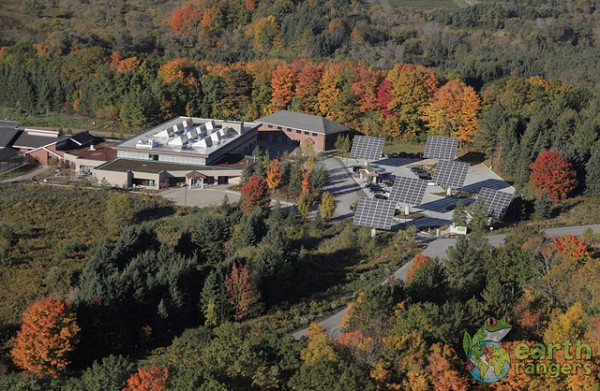 In 2001, when Earth Rangers was planning for its new facility, the mandate its members gave to the engineers and architects was that they wanted a building with the lowest environmental impact possible, a building on the cutting edge of eco-friendliness. Ten years later, the Earth Rangers Centre is one of the most energy efficient buildings in Canada and boasts some of the world’s leading architectural and technological innovations for reducing energy use.

Earth Rangers is a not-for-profit organization that works with children to “bring back the wild,” as their mission statement says. Rangers travel to schools, attend community events, and host 130,000 visitors at their Centre annually, working to educate kids on how they can coexist with the environment, protect animals and their habitats, and understand and preserve nature for years to come.

The Earth Rangers Centre features a theatre, interactive displays, and wildlife enclosures. But visitors to the Centre can learn almost as much about protecting the environment from the structure itself as they can from the demonstrations and workshops held there. Located at the Kortright Centre for Conservation in Woodbridge, Ontario, the Centre was designed to be as sustainable and energy efficient as possible. Windows are placed so as to let in the most natural light possible. The windows are also filled with argon gas, providing extra insulation, and there are several huge solar panels outside the building, which yield enough energy to power a third of the Centre’s electrical needs, the equivalent of 10 average Canadian homes. 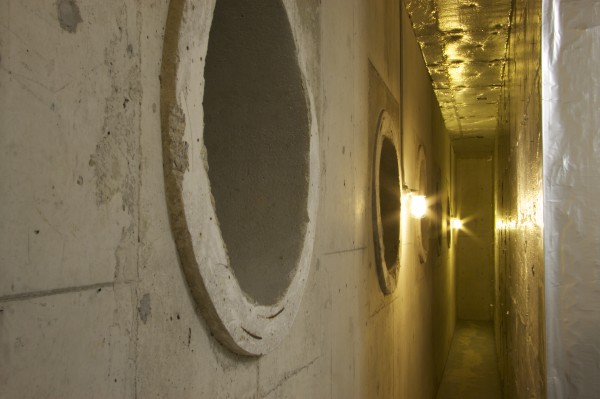 Underground "Earth Tubes" at the Earth Rangers Centre. The network of conduits passively cools air in summer and heats it in winter.

But those are some of the building’s more pedestrian features. There is also a ventilation system comprised of a series of concrete tunnels, known as “earth tubes,” buried three metres underground. Fans are used to draw outdoor air into the building. The genius of the earth tubes is that, at their depth, ground temperature remains around a static 12 degrees Celsius, all year-round. This means that, while traveling the length of the tubes, hot summer air is gradually cooled, and cold winter air is warmed, before it reaches the Centre, reducing the need to heat or cool the building using generated energy. As the stale air inside the building heats up, it rises to the ceiling and is drawn back into the central exhaust system, where most of it is recycled into the Centre.

It’s innovations like these earth tubes — the largest of their kind in North America — that have won the Centre some acclaim in the building community.

The efforts of Earth Rangers were recognized in 2006, when the Canada Green Building Council (CaGBC) awarded the Centre with LEED Gold status in the New Constructions category. Although the facility was not built with LEED in mind, the Earth Rangers Centre Manager, Andy Schonberger, explains that, upon the building’s completion, the Earth Rangers realized it met enough of the CaGBC’s criteria to score highly on the LEED scale. They also realized it was worth getting the added publicity of a LEED Gold designation, especially for a charity organization eager to reach more people.

Earth Rangers hasn’t stopped there, though. In the five years since the Centre’s LEED Gold achievement, many modifications have been made to the Centre’s infrastructure and maintenance, increasing its efficiency even further.

“We’ve had a lot of partners help us out with various technologies, and different ways of actually operating the building, sequences of operation, and hardware too [such as] new lighting technologies,” says Schonberger. “A little bit here, a little bit there, we’ve been able to conserve because we’ve continuously been tweaking systems.” 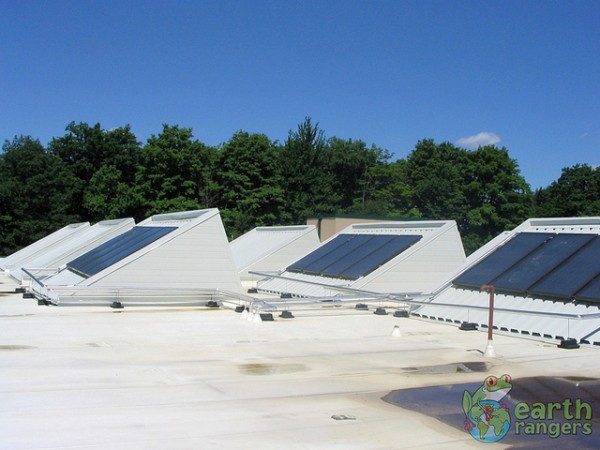 Rooftop solar panels provide about a third of the building's power.

This tweaking has amounted to a pretty hefty increase in efficiency. Originally built to be 67 percent more efficient than the minimum levels mandated by national building codes, the Centre has, in the past year, operated at 90 percent more efficiency than that minimum level. Encouraged by this increase, Earth Rangers has applied for LEED Platinum status for Existing Structures, the highest available ranking in that category.

One of the most significant additions to the Centre’s efficiency came in the form of its radiant heating and cooling system, comprised of 22 kilometres of tubes installed into the structure’s concrete floors and ceilings, and leading to underground wells outside. A mixture of water and glycol, warmed and cooled by the moderate ground temperature, is pumped through those tubes, radiating heat into the building in winter, and drawing heat away from the building in summer. There is also refrigeration equipment outside the Centre to supplement the heating and cooling as needed. The entire process is three times as energy efficient as a boiler would be at heating, and four times as efficient as a cooling tower for cooling.

Further reducing the amount of energy needed to heat and cool the Centre is the building’s thermal mass insulation, which is staggering both in its scale and its effectiveness. Behind the walls of the Earth Rangers Centre are 3,000 cubic metres of concrete, the immense volume of which makes heat transfer and temperature changes a very slow process.

Schoenberger remembers an incident two Christmasses ago when the Centre’s boiler, which was later replaced by the radiant heating tubes, went offline, leaving the building completely unheated. “The temperature [outside] was below zero,” says Schonberger. “But those three days that the boiler was off we only lost two degrees in temperature, just because there’s so much concrete mass. It’s a giant thermal battery, basically.”

The combination of earth tube ventilation, radiant heating, and thermal mass insulation is a prime example of what Schonberger credits with the Centre efficiency success: many different parts complementing each other. It is the integration of many different technologies and the efforts of many people, from designers, to engineers, to installers, that make the Centre so energy efficient. Not that energy efficiency is the only efficiency that concerns Earth Rangers. “It’s energy efficiency, it’s water efficiency. We really meant to minimize our environmental impact,” Schonberger says. Which is why there are also on-site waste water treatment facilities, which recycle between two thirds and three quarters of the water flushed down the Centre’s drains, cleaning it so it can be reused in irrigating the Earth Rangers’ gardens, cleaning out animal enclosures, and watering the plants on the centre’s green roof. 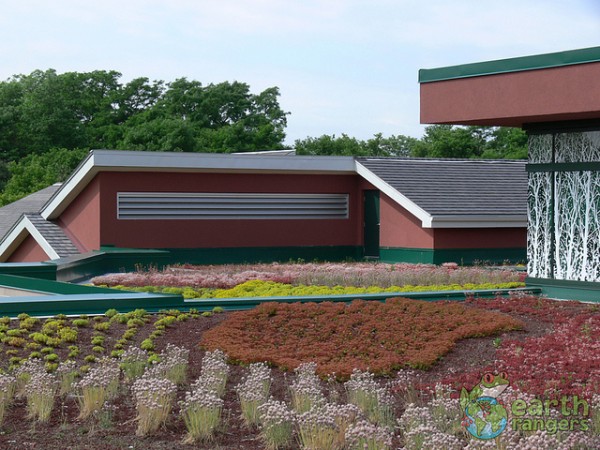 The green roof insulates the building, keeping it cooler in summer and warmer in winter.

It’s all part of Earth Rangers’ staff practicing what they preach which, for an organization whose mission is to teach and motivate kids to become the environmental stewards of Canada’s future, means doing everything possible to protect the environment. The members of Earth Rangers see their Centre as the embodiment of their eco-friendly values.

And while much of the Centre’s efficiency derives from complicated technologies and massive design innovations, Schonberger insists that anyone and everyone can do their part to be more energy efficient and help the environment.

“You can start with very, very simple things, just in what you buy, and how much you recycle, and what you compost. There’s a hundred different things you can do in your home,” he says. “[Energy efficiency] is not one simple thing. It’s every single action we do.”

All images some rights reserved by the Earth Rangers Centre. More available on Flickr.