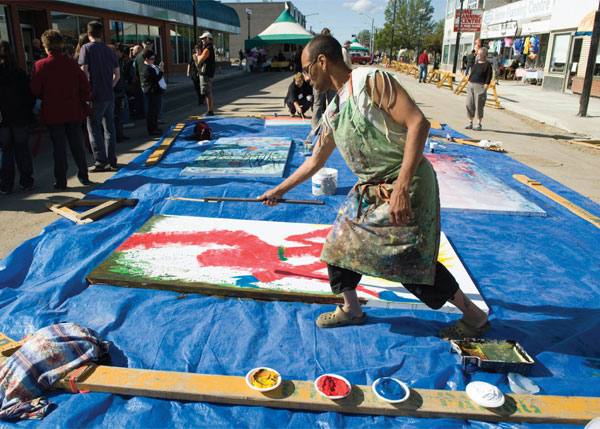 An outdoor festival hosted by Edmonton's Arts on the Ave. Photo by EPIC photography.

When I meet Christy Morin, founder of Edmonton’s Arts on the Ave, in the community arts cafe The Carrot, volunteer baristas are working the bar and activists with Black History Month are collecting their posters. Nearby, two community liaison police constables are huddled with a by-law officer, talking about their “weed and seed” program that targets drug houses and “predatory retail” drug-dealing fronts.

Morin lives in this Edmonton neighbourhood, the Ave—short for 118th Avenue—where I grew up in the 1950s. Once a proud working-class and immigrant quarter, it deteriorated like many old, inner-city neighbourhoods as the suburbs metastasized around Edmonton’s periphery. Today Morin tells me, with glowing satisfaction, that AOTA has just managed to find rehearsal space for four bands above an Avenue pawnshop—exactly the sort of growth she had hoped for.

“We are a community-based, grassroots initiative engaged in developing 118th Avenue as the community arts avenue of Edmonton,” says Morin, with the goal of “tapping into the non-institutionalized soul of art.” As an incubator, AOTA is a catalyst for other projects. “It’s a place of convergence for the whole community,” she says. AOTA began seven years ago as Morin’s vision of bringing artists into a neighbourhood of still-affordable housing and studio space, to see what the impact would be on this distressed neighbourhood. It turned out her vision was attractive to people all over the city who wanted to get involved—some of whom moved into the Ave so that community members now include professors and international students, people on disability-related income assistance, West African immigrants, and retirees, as well as the founding artists. “A new artist from Namibia is starting a community choir,” Morin says, part of a new connection to faith-based communities in the neighbourhood.

The list of activities goes on: the Nina Haggerty Centre for the Arts has recently opened with a gallery of art by “those who face barriers to artistic expression”; AOTA has held public meetings to brainstorm uses for a vacant cycle shop; murals and back-alley paintings spruce up walls; The Carrot café holds open mics for “zoomers” and Aboriginal drummers. That’s in addition to a farmers’ market, a popular block party for neighbourhood dogs (and their humans), and the annual Kaleido Arts Festival, which holds a popular “No-Tie” Gala—because, Morin explains, “for a lot of residents art is outside their comfort zone” and the casual vibe makes it more accessible.

Arts on the Ave was initially supported by an arts-friendly mayor and council committed to neighbourhood revitalization. But what it represents now, says Morin, is a “futuristic model of community involvement and development, putting your ideas out there before you have structures, letting go of your brand. It’s a web.” But this web isn’t online—it’s right around the corner.