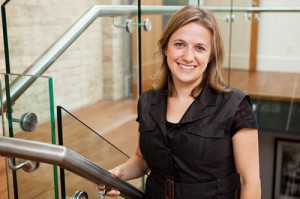 Canadians are giving up on their political system. Voting participation is at historic lows; the number of people who vote for the winning party is now routinely outpaced by the number who don’t vote at all. Most young people don’t vote—63 percent of people under age 24 didn’t cast a ballot in 2008—and that bodes ill for the future of Canadian democracy.

Alison Loat, director and co-founder of Samara Canada, is determined to get to the bottom of this increasing political disengagement.

Samara, based in Toronto, was founded in 2008 and has since been dedicated to the study of how Canadian citizens engage, or don’t, with their democracy. Their most attention-grabbing project so far was a series of “exit interviews” with former members of parliament, which uncovered a wide variation in what, exactly, MPs think their jobs are. The foundation has also hosted a series of talks on the future of journalism, and the role it plays in shaping civic life.

“The hope is to create a bit of a community,” Loat says, to “tell the stories of Canada in a compelling way so that citizens will engage with them.”

Loat is currently developing Samara’s next project, the Democracy Index, a report card on the health of Canadian politics and civil society. Expect a few “Needs Improvement” marks—dismal youth voter turnout, for instance—but Loat says the purpose of the index is also to highlight the things that are working well. The point, in the end, is to get citizens talking about the democratic system of which they are a part. “Any way that I can creatively influence and help the development of this country,” Loat says she’ll do it. “Because I think it’s a great place to live.”

Andrew Potter Then: This Magazine This & That editor, 2001. Now: Features editor at Canadian Business magazine. Author of The Authenticity Hoax (McLelland, 2010) and co-author of The Rebel Sell (Harper Collins, 2004).
Victoria Salvas is a freelance writer and former This Magazine intern.
Share Tweet Email Print