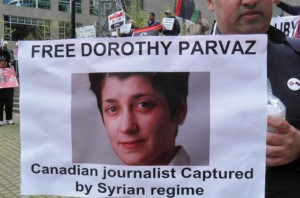 A protester at a Vancouver demonstration calling for Canadian al Jazeera journalist Dorothy Parvaz to be freed by Syria's government. Photo by al Jazeera/Isaac Oomen.

I’m sitting in a room surrounded by hundreds of people, kindred spirits, a number of whom would normally not cross paths. Chiselled-faced anchors sit side by side with journalists who have been exiled from their homes around the world.

Then a series of startling images jolt me up in my seat. Footage of riot police in full gear, faces covered, knocking journalists to the ground, along with demonstrators. A news photographer tells a story of being shot with a rubber bullet. This isn’t Gaza City or Cairo. It’s Toronto, during the G20 Summit in June 2010.

A few minutes later, a voice emanates from above, directly from Cameroon. It’s the brother-in-law of Cameroonian journalist Bibi Ngota, who died in prison. He’s listening in on cellphone and recording the evening’s events on his end, to be broadcast on radio later.

It was a powerful moment at a gala organized by the Canadian Journalists for Free Expression, a group that got its start 30 years ago. The organization was appalled at the kidnapping and murder of media workers during the bloody civil wars in Latin America of the 1980s. After a few decades and a couple name changes later, the CJFE has become enormously ambitious, mixing together high principles with clear-eyed pragmatism. The group’s president, a committed unionist, thanks a major bank for supporting its work building connections with Latin American journalists. Some of those journalists are here tonight.

Throughout it all, CJFE has avoided the false dichotomy that afflicts groups working on human rights internationally: that injustice only exists “over there.”

At home, CJFE has fought hard to broaden press freedom in Canada. It’s zeroed in on overreaching libel cases meant to silence journalists. It’s campaigned for more open access to information laws and is now pushing for an inquiry into the actions of police during the G20 Summit. Each year it reminds us that, even on our own doorstep, journalists can be targets of violence, naming an award after Tara Singh Hayer. Hayer was an outspoken Canadian journalist and editor of Vancouver’s Indo-Canadian Times who had been critical of Sikh extremism, and was murdered for those views in 1998.

Internationally, the group has broadened in its scope from Latin America to all corners of the globe. CJFE created a program for exiled journalists, lobbies for the release of detained media workers, and now runs what the group calls the world’s largest free-expression network, IFEX (International Freedom of Expression Exchange), which monitors abuses in over 60 countries.

Whether it’s drug cartels or corrupt regimes, CJFE has (often against the odds) tried to hold the powerful to account at home and abroad, firmly believing that democracy rises and falls based on the freedom of its media.