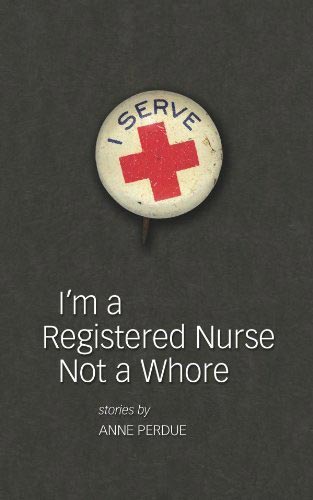 Anne Perdue’s characters face a tough, unforgiving world in her first collection of short fiction, I’m a registered nurse not a whore. Writing from a litany of perspectives—an overworked suburban dad, a frustrated couple renovating their first home, and an alcoholic grandmother—Perdue builds gritty characters who are pathetically funny, keenly aware of their own flaws, and sometimes so realistic it’s painful to read on.

In clear prose, Perdue skillfully relays characters both chock-full of emotion and, often, the architects of their own demise by way of impulsive reactions. “He recognizes that he can’t help messing it up sometimes just so he can put it back together again,” says one broken man, before taking a drill to his own toothache and later dying on the street as he brings a Christmas tree home to his girlfriend.

It’s a wickedly funny representation of bad things happening to decent people. A father buckling under stress shuts his dog in the barbecue and watches with horror when his daughter unknowingly goes for the starter. Two parents, determined to forge a connection to their teenage son, tape two joints to his birthday card as he’s busy lighting his restaurant workplace on fire. But there is always just enough hope. In one story, Leslie, after learning a neighbour has been murdered, spirals undone, ends her affair, and releases a kite into the sky—a symbol, she says, of a murdered man fluttering an elegant wave good-bye. The descriptions are occasionally overwrought (do hearts really explode?), but it’s barely noticeable amid humour so grim and delicious.