[This Magazine contributor Jenn Hardy is pregnant and due in a few weeks. In thisDue Date series, we’re running some of her thoughts on pregnancy, health, and her experience trying to de-medicalize her childbirth.] 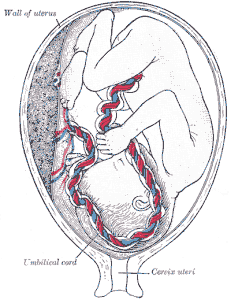 Going into the delivery room, you might have decided who was going to cut the umbilical cord. Will the doc do it, or is it something Daddy wants to do?

We often think about who is going to cut the cord, but give little regard to when the best time is to do it. Many people would say “immediately” is the obvious answer. But some people never cut the cord, leaving newborn and placenta attached for the first few days of life.

On this one, I’m most comfortable somewhere in between. I vote for delayed cord clamping (waiting a few minutes until the cord has stopped pulsing before clamping it), but I have no plans to practice Placentophagy (eating the placenta for its nutritional value).

For the most part, a hospital wants to get a woman in and out as soon as possible. Not necessarily because the place is run by a bunch of jerks, but because there is only enough space. Most of the time, the preference will be to clamp the umbilical cord within a few seconds of birth.

But this might not be to baby’s advantage. More and more people are asking for delayed cord clamping, realizing the many benefits that come along with it.

Delaying the cord clamping can allow up to 50% of the baby’s blood volume to flow back into her little body, while early cord clamping results in fewer red blood cells and can cause postpartum haemorrhage, retained placenta and respiratory distress for the baby. Delayed cord clamping may help prevent anaemia later in life.

The Society of Obstetricians and Gynaecologists of Canada says, “Waiting at least two minutes after the baby is born before cutting the umbilical cord may help your baby get more blood supply. This may be most helpful for premature babies. If your partner wishes to cut the cord, this can also be arranged.”

I was surprised to see how quick the hospital was to push for cord blood donation. It was the first thing we were told about when we went in for an appointment a few weeks pregnant.

There are two public and 10 private Health Canada-registered cord blood banks in Alberta and Quebec.

When we went to visit our hospital to check out where we would be having the baby, a big part of the presentation was spent waxing lyrical about donations. There has been a lot of controversy surrounding cord blood donations, not necessarily because of the early clamping that’s necessary to keep the blood, but because people aren’t so sure of the point of public cord blood banking.

Donating to a public bank makes a lot of sense, I think (it’s public donations that the hospital was all-for). Private donations on the other hand are mind-boggling. The chances your child will ever use his own cord blood are so slim.

And if he has certain illnesses like Leukemia (one of the most common diseases that cord-blood stem cells are used to treat) his own blood likely can’t correct the defect. Treatment would likely end up being taken from a public bank anyway.

Some people take comfort in keeping the blood in case a sibling is ill one day, but private storage of your child’s blood into teenagerdom costs thousands of dollars.

After watching the Hema-Quebec supported video at the hospital it was time for my partner and I to have a long talk about what we wanted to do. He was very touched by the video, feeling that if he had the chance to save another child’s life, he would like to take it.

Maybe I’m heartless, but my vote was for allowing our baby to keep her own blood. We sought out the advice of our doula, who never offers her opinions unless I drag them out of her.

“So,” I asked, “Hypothetically speaking, what would you do?”

She said that if she spent the entire pregnancy taking such good care of herself and the baby by making the right food choices, exercising regularly, and taking prenatal vitamins etc., why deny that baby this last bit of nutrients?

After a little more discussion we decided: Baby, you can keep your blood.