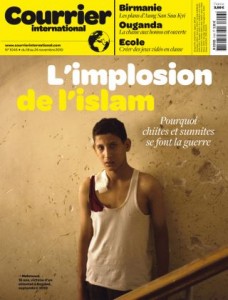 Cover of Courrier International for the week of November 18, 2010

Just two days ago, we were telling you about a This feature appearing in the just-launched Best Canadian Essays 2010. Here’s another This feature taking flight: We were pleased yesterday to find Patricia Bailey’s feature on the new wave of Québécois cinema, from the May-June 2010 issue, reprinted (with permission, natch) in Courrier International, the prestigious Paris-based weekly newspaper that translates and excerpts the best of the international press for French readers. On yesterday’s Courrier homepage, Patricia’s story appeared alongside articles from the New York Times, Nature, and the Guardian. Good company!

[This is a] generation of thirtysomething Québécois filmmakers, coming to be referred to as the “Quebec New Wave,” who explore the disquiet and confusion of life on this continent. Although these young filmmakers justifiably reject being labelled as a collective, taken together, their work reflects a new sensibility in Quebec cinema. While the characters speak French, their experience as members of North America’s largest francophone minority barely registers. Their cultural reference points are universally North American, not specific to Quebec. Questions of language and nation are conspicuously absent.

You can read the French excerpt on Courrier‘s website, and read the original on ours.

Courrier also profiles each publication in the newspaper and on their website; note that in our profile they list our “genre” as “militant”! They previously reprinted another of our stories, Jasmine Rezaee‘s article on the effect of the 2010 Olympics on aboriginal land claims in British Columbia.