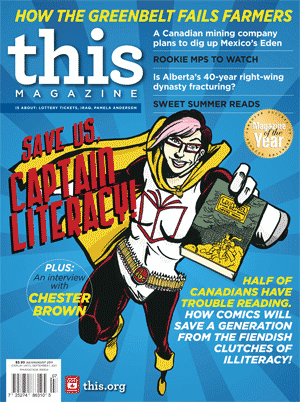 The July-August 2011 issue of This Magazine (that’s it on the left there!) is now in subscribers’ mailboxes (subscribers always get the magazine early, and you can too), and will be for sale on better newsstands coast-to-coast this week. Remember that you can subscribe to our RSS feed to ensure you never miss a new article going online, or follow us on Twitter or Facebook for updates and links to new articles as they’re posted.

Lots of great things to read this issue. Like Lindsay Mar‘s cover story on Canada’s literacy crisis, and why comic books and graphic novels — long regarded as part of the problem — may be the secret weapon we’ve been seeking. And there’s Dawn Paley‘s report from Mexico’s Wirikuta region, where a Canadian mining company is preparing to dig for silver in the heart of peyote country. For the local Huichol people, it represents not just a potential environmental problem, it’s a spiritual crisis. Plus Chelsea Murray meets some of the dwindling numbers of farmers working in Ontario’s much-vaunted Greenbelt. Though the province saved 1.8 million acres of green space from Southern Ontario’s urban sprawl, it may not be enough to save the family farms working that land, who are increasingly leaving for more rural locales—and often selling out to agribusiness and rich hobbyists.

And there’s lots more, as always: Since we’re talking graphic novels, Paul McLaughlin interviews Chester Brown, author of the new memoir Paying for It; Jillian Kestler-D’Amours sends a postcard from the disputed landscape of Canada Park in Jerusalem; Jen Gerson surveys the fracturing of Alberta’s formerly unstoppable conservatives; Herb Mathisen points out four rookie NDP MPs to watch (the ones who didn’t get as much press as Ruth Ellen Brosseau); Whitney Light profiles the work of artist Kristin Nelson, who’s taken iconic Canadian bombshell Pamela Anderson as her muse; and Christina Palassio charts the resurgence of long-form essay journalism.

With new fiction by Zoe Whittall, new poems by Sadiqa De Meijer and Greg Evason, and reviews of The Chairs Are Where the People Go, Prizing Literature, Six Metres of Pavement, and The Next Day.