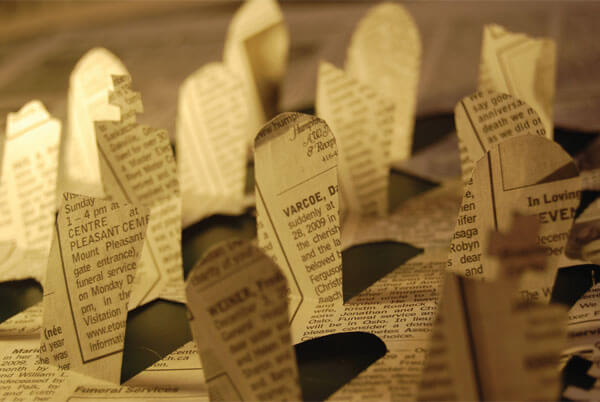 With the rise of paid death notices, the old-fashioned obit's days may be numbered. Photo by Graham F. Scott.

Apple Inc. co-founder Steve Jobs’ conspicuously detailed death announcement, accidentally published by Bloomberg news service in 2008, revealed a little-known fact about the craft of writing obituaries: the blood doesn’t have to have gone cold before someone writes the first draft of your final epitaph. In fact, there doesn’t even have to be a reason to suspect that you’re in dire straits for an editor to assign a writer the task of encapsulating your entire life history into six inches of column space.

That’s why it might not be too early to start writing about the death of the obituary itself. Obituaries may not be dead and gone, but they’ve certainly seen better days. And as things stand now, obituaries may just predecease the rest of the newspaper industry. “The dead beat,” as it’s called by professional obituary writers, may finally live up to its name.

“In this country I think there are five or six people left on ‘the dead beat,’” says the Globe and Mail’s Alan Hustak, a 30-year veteran obituary writer with 700 obits to his name. “I would venture to guess all across North America there are probably no more than 100 of us.”

Most newspapers don’t have the luxury of having a full-time obituary writer anymore, he says, since they’re too busy trying to survive with a reduced staff. Instead, they buy articles from American wire services. “If you look at Canwest newspapers, very few Canadians die now, but you’ll have a detailed obituary about the floor salesman who worked at Filene’s Basement or a hairdresser for Marilyn Monroe,” says Hustak.

The brainchild of Monster.ca founder Jeff Taylor, Tributes.com hopes to change that by cataloguing new and archived obituaries going back to 1936 from those submitted to newspapers by funeral homes. As a business model, literary obituaries aren’t nearly as profitable to newspapers as paid obituaries from the families of the bereaved.

“In the newspaper industry, there used to be an editorial staff that wrote obituaries that told a life story and which would take up a couple of inches of a newspaper,” says Heald. “But what would happen was an obituary was always free, because it was just good content, and that couldn’t be supported.”

What remains, says Heald, is a paid death notice in the form of classified advertising.

“It’s too expensive to tell everyone how much of a great person this guy was and his interests and his hobbies, so the days of some really robust good editorial obituaries being written are far and few between,” he says.

Obituaries for the rich and famous, however, are still in tight supply.

Marilyn Johnson, author of The Dead Beat: Lost Souls, Lucky Stiffs, and the Perverse Pleasures of Obituaries, got her start writing celebrity obits at Life magazine in 1997, following the death of Diana, Princess of Wales. Many of her assignments, however, were for people who still had a pulse.

“I actually had assignments from a series of magazines to write obits of celebrities who were presumed to be on their way out, and everybody I wrote about sort of got a fresh wind,” she said. Her obituary of Katharine Hepburn, originally intended for Life, didn’t see the light of day after the magazine predeceased Hepburn by three years when it folded in 2000.

Hustak, who left the Montreal Gazette in March of last year after 22 years on the obit desk, says people often stop him on the street to say, “Oh, you’ve left the Gazette? That must mean no one’s going to die anymore.”

Hustak hasn’t stopped writing obits entirely, and even if he did you would still be able to run into his byline for years to come, since he has a cache of 100 unpublished pieces just waiting for their recipients to expire.

So could the obituary industry go on living longer than expected? If the experience of obit writers is anything to go on, mortality is a fickle thing.

“One of those obits I’ve already written was written 14 years ago because I was told this man had one week to live,” says Hustak. “I had lunch with him two weeks ago. Only [God] knows.”