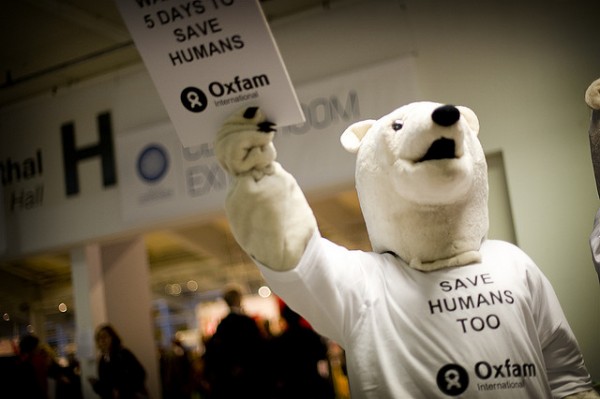 Negotiators are currently engaged in talks in Germany to discuss the agenda for the year-end environmental summit in Mexico. The Mexico meeting is intended to broker a new international agreement to replace the soon-to-be expired (but long since overshadowed) Kyoto Protocols.

Sounds promising; but before we get too ahead of ourselves, let’s try and understand what exactly is going on here: international decision makers are spending their time in meetings to discuss the agenda for upcoming meetings to replace an agreement that was the celebrated result of past meetings but has largely been ignored since. All the while, citizens of the world wait patiently like the oblivious frog in the slowly blowing pot of water as climate change ravages whole countries.

While UN delegates at the Bonn conference have taken off their jackets and ties in a fatuous stance against the abstract concept of heat, much of the rest of the world is being forced into the realization that climate change is not about weather getting warmer—it’s about the volatility and unpredictability of weather, and the storms, floods, droughts, and other natural disasters that come with that.

Leaving world leaders to their meetings, lets check in with the real world: Russia is literally burning as wildfires have sprung up across the tinder-dry land already ravaged by a record-setting heatwave and smog choking the capital. China and India-controlled Kashmir are still dealing with the aftermath of massive floods and mudslides following heavy rains that overflowed the Bailong River, leaving hundreds dead and chasing thousands from their homes. The Pakistani floods have affected more individuals than the 2004 Indian Ocean Tsunami, 2005 Kashmiri earthquake and the recent earthquake in Haiti combined—the UN estimates that nearly 14 million people will be affected by the country’s worst flooding in 80 years. Seven million people in Niger face starvation as droughts have ravaged crops in the Sahel region of Africa, leaving an estimated 10 million people across the region with no food. A sheet of ice 260 square kilometers—more than four times the size of Manhattan—broke off the Petermann Glacier recently, making it the largest Arctic iceberg to split since 1962.

And yet while all of this is going on, Globe and Mail’s Neil Reynolds has the audacity to answer the cries for a solution to climate change with a single word, emblematic of the hubris that led us blindly into this crisis in the first place: “adapt.”  Sure! Humans undoubtedly can adapt to a 0.6 degree increase in our average temperature (especially those of us in the West, sitting comfortably in front of our air conditioners). But what of the environmental systems directly affected by our actions (the crisis in Russia, if nothing else, shows us exactly how sensitive the global food system can be to an increase of even a few degrees as drought, heat waves, and wildfires have created a perfect storm that’s decimated Russia’s wheat crops). Oceans, glaciers, forest and agricultural cycles are all intricately affected by the most minute changes in weather patterns, and while we may easily be able to adapt to the changing weather our pollution has created, the basic systems that sustain our life may not.

To recap, then: climate change talks in Bonn, aimed at establishing a working platform for the upcoming summit in Cancun, have back-slid as some leaders are walking away from even the most modest commitments they made in Copenhagen. China and the U.S. have clashed in the meetings, and rich countries have lined up against developing nations in a refusal to compromise on emission-reduction targets. This tit-for-tat maneuvering is endemic at the senior negotiating level, and threatens to derail the entire endeavour. All the while, the world burns.

The pot of water has been gradually getting hotter around us for some time.  While Reynolds and his kind turn up their air-conditioning and UN delegates loosen their ties and talk in circles, we’re begining to feel the heat.