Descriptions of Conrad Black in news stories about his arrest, conviction, subsequent time served in jail, and now his bail hearing, often liken him to some sort of greasy mammal, who has “wriggled free” after “swindling” the public out of $6 million. 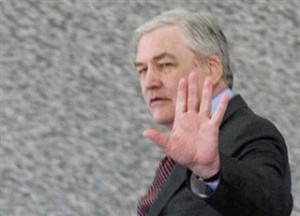 "High fives, anyone? Anyone?"

News of Black’s bail-granting in Chicago broke on Monday, overshadowing the results of another bail hearing, which took place in Toronto and which was generally overlooked by large media outlets. Byron Sonne, who was arrested on June 22, three days before the beginning of the G8/G20 Summits, faces charges of mischief and possession of explosives, among others, and was denied bail on Tuesday. Due to a publication ban, the reason for the denial of bail can’t be mentioned here.

Sonne’s arrest preceded a number of other preemptive arrests that took place before the G20; that police shakedown targeted community organizers. Some of those organizers were dragged out of their homes in the middle of the night, or snatched from street corners by plainclothes cops and thrown into unmarked vans in broad daylight. They were held in maximum security prisons until their bail hearings, which began on July 6th and continue today, and many of them are facing serious conspiracy charges.

Conspiracy charges are slippery things. It seems as though they should be both extremely easy to prove and extremely hard to prove: one doesn’t have to do the thing they’ve agreed to do, as long as they’ve talked about doing it, they can be found guilty of conspiracy. A quick review of Canadian Criminal Law 101 indicates that past rulings ultimately rested upon the efficacy of the arguments presented by the lawyers, and the legal knowledge and general whim of the presiding judges.

At the maximum security prison where the community organizers were being held before their hearings (and where two currently remain), there was little available to read, nothing much to do, and visits were limited to twice a week. Sometimes the phones, which allowed them to speak to their visitors on the other side of three-inch thick plexiglass, were broken, and there was nothing they could do but stare at each other until their time was up. In his minimum security prison, Conrad Black, (stealer of six million real dollars, friend and business partner of weasels and turncoats) was able to roam the grounds freely, read a wide array of periodicals and books, or listen to the radio on headphones during recreation time. He penned articles and gave interviews, all with the air of indignation that one would expect of a hardened Lord doing soft time.

The bail conditions on the “G17”, as some media outlets are calling them, are essentially designed to keep them separated from their communities and punish them for exercising their political right to protest. There’s something perverse about Conrad Black—actually convicted of a crime in a court of law—returning to his $32 million Palm Beach estate, while a G20 protester—innocent until proven guilty, not yet tried in court, and held on the basis of secret evidence—is denied bail and kept behind bars.