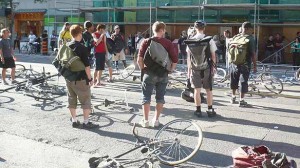 The chain of events late Monday night that ended in the death of Toronto cyclist Darcy Allan Sheppard—during an altercation with former Ontario MPP Michael Bryant’s car—are terrible and sad to behold. The news spread like wildfire yesterday and the local and national media descended en masse to report every detail.

One such detail (among many) that troubled me was that police volunteered the information that they had had another interaction with Sheppard on Monday. It was unrelated to the night’s events and had nothing to do with cycling nor traffic: the Toronto police had responded to a “noise complaint or a domestic dispute” earlier in the day involving Sheppard and his girlfriend:

Officers had been called to the scene of a domestic dispute on George Street, near Jarvis and Gerrard streets, Monday afternoon, Toronto police said.

“I guess you could say it was concerns of a noise complaint or a domestic dispute. When police arrived on scene, they investigated. There was no indication a criminal offence took place,” Staff Sgt. Kevin Guest told CBC News.

What was the relevance of this information? Why, moreover, were the Toronto police disclosing this information yesterday? No criminal offence, no official report, no charges—just the vague impression of…what? Emotional instability? Irresponsibility? Unsavoury-ness? I can understand a reporter, wanting to leave no stone unturned, asking whether Sheppard was known to police; what I can’t understand is why the police would answer that question, essentially tarnishing the reputation of the victim while the investigation is still going on.