Today will see lots of breaking news and commentary related to the Israeli military’s raid on humanitarian aid ships bound for Gaza. We’ll update this list of notable links as we see them. Email your suggestions to editor at this dot org or leave them in the comments section below. We’ll update periodically throughout the day. 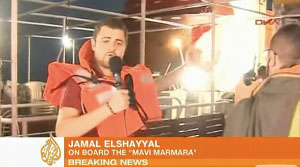 Al Jazeera correspondent Jamal Elshayyal reports from on board the Mavi Marmara, one of six ships that were intercepted by Israeli Defence Forces while attempting to break the blockade of Gaza on May 31, 2010. Screengrab from Al Jazeera web video.

Al Jazeera is live-blogging flotilla-related news today with frequent updates. AJE also has a video report from on board one of the convoy’s ships filed before communications were cut off.

The Guardian has a good photo gallery online. The paper’s Middle East editor Ian Black calls the operation “a disastrous own goal.” The New York Times added a photo gallery later in the day.

The Twitter hashtag that seems to have caught on is #freedomflotilla. There were questions this morning why #flotilla appeared and then disappeared in Twitter’s trending topics. Unknown parties have set up the spoof Twitter account @IsraelGlobalPR (mimicking the highly successful satirical feed @BPGlobalPR).

Tikkun Magazine has published a statement from the Network of Spiritual Progressives that encourages synagogues around the world to say Kaddish for the flotilla victims at services this weekend. 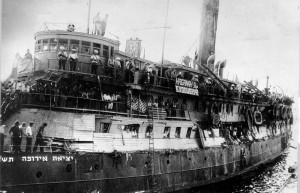 The Exodus, pictured in 1947 after British troops took it over.

A New York Times blog has this take on the historical parallel between today’s naval incident and the British government’s violent repulsion of the Exodus in 1947, a ship carrying thousands of Jewish holocaust survivors attempting to immigrate to Palestine: “The attack and its aftermath, which focused attention on the plight of many European Jews after the war, made headlines worldwide and helped marshal support for an Israeli state.”

Rabble has the names of the two Canadians known to be part of the flotilla: Kevin Neish, 53, of Victoria, B.C., and Mary Hughes, 77.

Wikipedia now has a page on the clash that is being continuously updated.

The BBC provides a backgrounder on the Gaza blockade, under way since 2007.

Al Jazeera has a 25-minute video of their show “Inside Story,” with more analysis and background on the blockade and the flotilla. It’s embedded below: