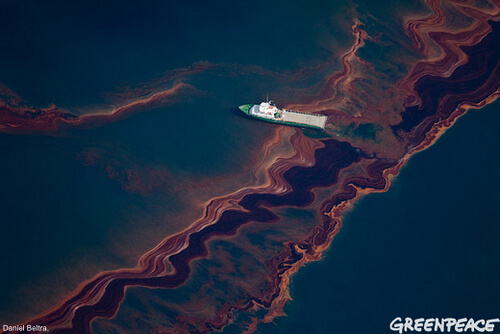 Louisiana (USA). May 6th, 2010. Aerial view of the oil leaked from the Deepwater Horizon wellhead, the BP leased oil platform exploded April 20 and sank after burning. The picture was taken in the vicinity where the platform sank from an altitude of 3200 ft. Photo by Greenpeace USA 2010.

Even as the Deepwater Horizon spill releases an estimated 25,000 barrels of crude oil a day into the Gulf of Mexico—making it, in some experts’ estimates, an even greater ecological disaster then 1989 Exxon Valdez spill—Chevron Canada Ltd. is pursuing plans to create one of the deepest offshore oil wells in the world off the coast of Newfoundland and Labrador.  While President Obama and California’s Governor Schwarzenegger have passed a moratorium on offshore drilling in the U.S. in response to the Gulf explosion and the Canadian National Energy Board has announced a review of arctic safety and environmental offshore drilling requirements for the Canadian north, Chevron is preparing to drill 2.6 kilometers under water in the Canadian Atlantic—nearly 1 kilometer deeper then the BP well in the Gulf of Mexico.  The Chevron drill ship Stena Carron will be drilling in the Orphan Basin in the North Atlantic, 430 kilometers northeast of St. John’s; and while many have raised concerns about the dangers of another possible leak, the federal and provincial governments are doing their best to assuage those fears and press on with the project unchanged.

In a debate before the provincial legislature, Newfoundland and Labrador’s NDP leader Lorraine Michail voiced her concern: “Why won’t they put a halt to this project until we know how to deal with incidents so far beneath the ocean?” she asked, referencing BP’s inability to deal with the ongoing spill in the Gulf and their slow reaction time in drilling a relief well.  In response, the province’s natural resources minister Kathy Dunderdale has defended the project, asserting that unlike the Deepwater Horizon ship, the Stena Carron is equipped with three backup systems; “we have a degree of security—as much as one can rely on—that the proper measures and countermeasures are in place,” she said.

While the federal government is assuring those concerned that our safeguards are tougher than those in place south of the border, some analysts worry that Chevron’s backup plans are not designed for this new class of superdeep well. Ian Doig, an oil industry expert, commented to the Globe and Mail that only two rigs are located near enough to the Orphan Basin to be of any help in case of a spill, but that neither of those rigs are equipped to drill relief wells in the depths proposed. “If Chevron gets into problems at the total depth of its proposed well, neither of those two rigs in the area have the capability of going down to that depth […] They’ll just have to stand back and watch,” Doig said.

If Canada’s intractability comes as any surprise to you, it shouldn’t. I only have to point you to George Monbiot’s condemnatory Guardian article accusing Canada of representing the single largest impediment to positive environmental change on the global scale or to Zoe Cormier’s postcard from London last September in which she documents Canada’s place as public enemy number one for many environmental groups.  The reluctance or inability of our government to enforce greater accountability on the oil industry is merely the latest manifestation of an attitude that has spawned the ecological disaster of the tar sands, the world’s dirtiest oil project and the largest single industrial source of carbon emissions.

While Chevron has assured the government that the project is as safe as it can be, the question must be asked: how much of the environment is our government willing to sacrifice for the economy?