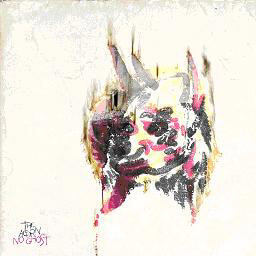 Cover of The Acorn's album No Ghost

This edition of Tuesday Tracks is inspired by The Socalled Movie – a film about Ottawa-born, Montreal-based multi-disciplinary artist Socalled. The film premiered at Hot Docs last night and besides being taken by his brazen quest to simply create, I was shocked that despite the level of success he has achieved over the years, I’d never heard of him. So I scrapped my initial list of press-release-approved new releases and took a look at some overlooked acts who are, at least, new to me.

First up, the previously mentioned Socalled. He is a musician, magician, filmmaker, visual artist and non-practising Jew. Well, his music is a hip hop/funk/klezmer hybrid so while he may not actively participate in the faith-based aspects of his heritage, he wears his yiddish roots on his sleeve. As evidence in the new film about him, The Socalled Movie, his passion is people, not gods, and his art reflects that. What’s most refreshing about him is his enthusiasm, the fervor in which he travels through life.

In the documentary, he explains that in a world that has produced the likes of James Brown or Pablo Picasso or any number other artistic geniuses (he lists a few), in a world full of monumental human achievement, how can someone look at it all and not think to themselves “I want to try that.” And so, it is with that mantra that Socalled creates, and so far it’s turned out pretty great:

Next is Jesse Matheson, a bohemian with a sense of humour. His music is equal parts attitude and sex, but always presented with a little bit of a grin. The songs seem as though written as a lark, but later performed with gusto, or maybe that’s the other way around. Either way, the songs are thoughtful and playful and even, at times, a little bit profound. Here’s his song, “Make Out”

Finally, I should admit The Acorn are not completely new to me. The band are a mere month away from the June 1 release of their new album No Ghost and if first impressions are any indication, they have emerged from their cocoon transformed. So, although I deviated from my plan, I justified it to myself because this record sounds like it was created by a new band. It is an energetic arrangement of electronic trickery, leaps and bounds ahead of the acoustic confessions of their previous effort Glory Hope Mountain. Acoustic guitars have been traded in for patch chords and pedals and instrumentation has been thrust front and centre. Rolf Klausener’s vocals are merely first among equals with the other sounds that occupy the song and if the rest of the record follows suit, it will be an exciting ride. Here is the title song, “No Ghost”: