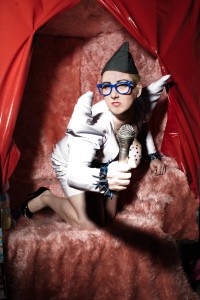 In the latest edition of Listen to This I interviewed Nadja Sayej and Krzysztof Pospieszynski, the onscreen and offscreen personalities, respectively, behind ArtStars*, an online video magazine that bills itself as “the TMZ of the Toronto art scene.” What that means in practice is that host, interviewer, and provocateur-in-chief Nadja crashes gallery openings, parties, and other gatherings of visual arts professionals and causes a scene of some sort: she shouts; she stomps around asking impertinent questions; she barges into back rooms she’s not supposed to be in. In every case, she delights in ridiculing and badgering the esteemed art-world personalities she meets, deflating what she sees as their pretense, empty rhetoric, and brittle cliqueiness. At that point, the show’s editor, Krzysztof, takes over, distilling the whole thing to a three-minute collage of loudmouthed shenanigans, agressive, stream of consciousness patter, and incongruous sound effects. No description here can really do it justice; all the videos are available through their website, and I’ve embedded a few notable episodes below.

Unsurprisingly, ArtStars* is polarizing: many in the art world find it to be irritating, lowbrow nonsense; others seem thrilled to see the dead-seriousness of the contemporary art world skewered by such a direct and colourful assault. Whatever you think of it, their provocations are increasingly drawing attention—including, most recently, a writeup in the austere pages of the terribly serious Art In America.

There are a few videos referenced in the interview, so for easy reference, here they are: