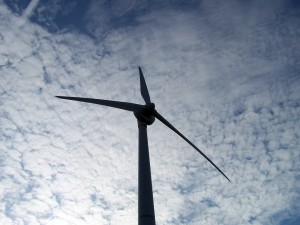 Demonstration wind turbine in Toronto. Ontario wind power installations will be the first to shut down when conservation measures are successful, This Magazine has learned. Creative Commons photo by Flickr user Diego_3336.

Despite its recent investment in wind energy, Ontario will periodically ask wind operators to turn off their turbines, leaving gas and nuclear operating, This Magazine has learned.

Conservation efforts and more energy production have led to an occasional surplus of electricity in the province, requiring Ontario to power down some generators at certain times of the year. According to a source within Ontario’s non-renewable generating sector, wind generators will be the first to be shut down during surplus periods due to contracts that favour older natural gas plants. Ontario will soon have 1,200 Megawatts of wind power installed, and significant portions of it would periodically go unused under the scheme.

“It makes no sense to burn natural gas or nuclear fuel while wind turbines are locked out,” said the source. This agreed not to name the individual because doing so could lead to employer sanction.

Without any significant ability to store electricity, Ontario’s Independent Electricity System Operator (IESO) balances energy generation with the amount being consumed every five minutes. The IESO adds power based on the lowest cost bids offered by generators, going from lowest cost up.

Some older gas plants have contracts that allow them to generate fixed amounts of power at all hours. Nuclear plants, which are unable to quickly change their level of production, offer their power at a negative price at times when demand is low. The need can become so low that only those offering at negative prices are asked to generate power.

However, the Ontario Power Authority, the government agency that controls contracts and planning for Ontario’s energy system, does not permit wind generators to run at negative pricing. A “Feed-in-Tariff” program offers a fixed cost for clean energy producers to operate. Key to the business plans of wind turbines is being able to sell every megawatt they are able to generate. The effect will be that nuclear and older gas plants will continue to run, while wind farms, co-operatives, First Nations, and farmers will be the first asked to shut down their turbines.

The generally accepted purpose of energy conservation—to reduce the need for dirtier power—will be turned on its head as turbines shut down when use is low. The policies will mean that when Ontarians work to reduce their energy use—if, say, Earth Hour happens at a time of moderate temperatures, as it did in 2010—consumers may unwittingly prompt the shutdown of greener energy producers.

Such negative pricing periods happened for 351 hours in 2009 and the issue will become more acute this year, with significantly more wind-power generators on the grid.

The OPA plans to add significant capacity throughout the province. Because Ontario’s demand for electricity can range from 12,000 to 27,000 megawatts, the OPA has reasoned that more generation is needed for peak times. Ontario recently signed a deal with Samsung C&T and Korean Electric Power to build and generate 600 megawatts of wind power in the province. Last Thursday, it announced 184 additional contracts for renewable energy projects, including wind and solar. It is also pursuing natural gas power plants including controversial projects in King and Oakville as well as renewable projects throughout the province. The King plant is planned to run on an as-needed basis, but that plan has been criticized by Holland Marsh farmers and environmental organizations.

According to a report by the Ontario Clean Air Alliance, the area’s power needs could be met by expanding programs which pay companies to reduce power, along with increased renewable generation and possibly cleaner ways of using natural gas.

The province’s plans for new nuclear generation last year stalled after a bid for two reactors came in at a cost of $26 billion. According to the Alliance, the cost of new nuclear energy is 21 cents per kilowatt hour, versus three cents for conservation and nine to thirteen cents for wind and water power.

Update – July 3, 2019: Those looking for technology recycling facilities can also visit this Tech Recycling Map for nearby centres.