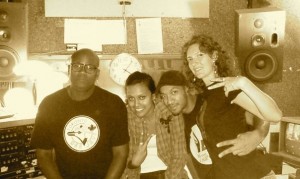 We’ve done something a little different with Listen to This #008, bringing you a special hour-long conversation between several This Magazine contributors and Toronto’s Vibe Collective, a group of broadcasters who do a weekly mix of talk and music on CIUT 89.5 FM (available anywhere, anytime, at ciut.fm). Interviewers Jamaias DaCosta and Chantelle Jaime welcomed some writers who contributed to our November-December 2009 issue, “Legalize Everything,” on to the show to talk about the different legalization measures they had written about: Katie Addleman on legalizing drugs, Tim Falconer on assisted suicide, and Laura Kusisto on hate speech. This editor Graham F. Scott (uh, that’s me) was also there to chime in on the origins of the special issue and some of the thorny topics it tackled. It’s a lively, challenging conversation about some really fascinating topics. Running to one full hour, it’s longer than one of our usual podcasts, but we thought it was worth running the conversation in its entirety. The talk took place in mid-January 2010. Hope you enjoy it.