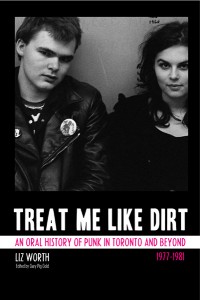 Cover of "Treat Me Like Dirt: An Oral History of Punk in Toronto and Beyond"

In today’s edition of Listen to This, Marisa Iacobucci talks with Liz Worth, author of Treat Me Like Dirt: An Oral History of Punk in Toronto and Beyond. The book chronicles the punk scene  throughout the turbulent years from 1977 to 1981, in the words of the bands and tastemakers who made it happen. Through interviews with Teenage Head, The Viletones, The Diodes, The Curse, Forgotten Rebels, B-Girls, The Ugly, and more, the book is kind of like a VH1 Behind the Music special from hell, and a Who’s Who of a musical scene that’s often been overshadowed by its counterparts in bigger American cities. There was clearly an appetite for the stories told here — the book has already entered its second printing and there are plans for a followup volume in the works.

In addition to her music writing, Liz Worth is an  experimental poet; her most recent book of poetry is Eleven Eleven, published by Trainwreck press.