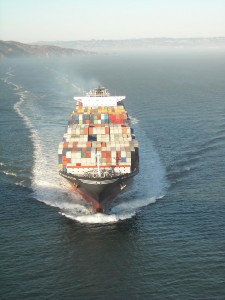 A container ship carrying cargo. Slowing the pace of shipping can save money and carbon

It’s been a tough couple of years for the shipping industry. First there was the recession, which led to almost 12 percent of the world’s cargo ships spending last December empty and anchored. The industry has also come under fire by environmentalists for its contributions to climate change and air pollution.

At December’s Copenhagen summit, the group Climate Justice Action (CJA) staged a protest outside the headquarters of Maersk, one of the world’s largest shipping companies. While shipping may be a worthy target—it’s responsible for two to five percent of global CO2 emissions—going after Maersk was a strange choice. Even the CJA’s factsheets acknowledged the company’s green initiatives.

Among other things, Maersk has been developing a long-known but little-used practice called “slow steaming.” When big cargo ships slow down, they can sometimes run more efficiently. While each journey takes longer, the practice cuts CO2 emissions by 10–30 percent, and for the largest vessels it’s equivalent to saving 3,500 tonnes of fuel each year.

The process is not as simple as pulling a lever, though. At some speeds, slow steaming can increase other kinds of pollution, or cause mechanical problems. That’s why slow steaming at Maersk was a pilot project first.

“We worked with the engine manufacturers,” says Lee Kindberg, Maersk’s director of environment. “They used to recommend that you operate in the 40-60 percent maximum operating range […] but we were able to demonstrate that you could get good engine results as low as 10 percent.” So the company is currently slow steaming 200 ships for at least part of the year. Maersk says that slow steaming also reduces emissions of other pollutants too, including sulphur dioxide.

In 2007, the Intergovernmental Panel on Climate Change warned that slow steaming wouldn’t be adopted without more regulation. But thanks to the recession, several other shipping lines have voluntarily slowed down their vessels. For each large boat they slow down for a year, they save around US$1 million and 10,000 tonnes of CO2.

Slow steaming might reduce costs and emissions, but as long as there is no global system to regulate shipping emissions, it’s likely to be a temporary measure. As the economy recovers, customers become less tolerant of delays, and it could be full steam ahead for the planet’s cargo ships once more.