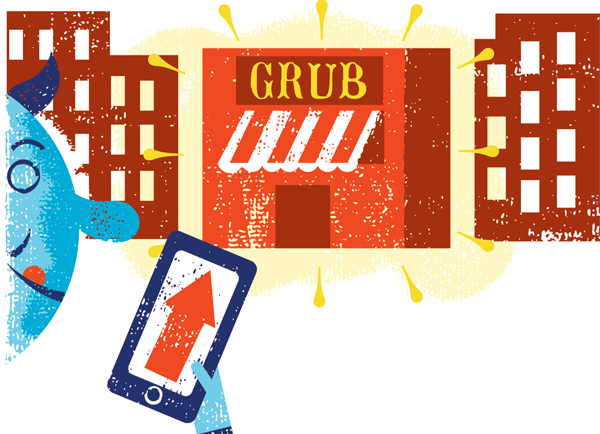 In ways large and small, having the internet in your pocket changes the urban experience. Illustration by Matt Daley.

I stood there on the street, squinting into my phone, needing to double check. Could the nondescript restaurant before me really have, as the anonymous web commenter put it, “the. best. hot sauce. ever.”? It didn’t seem likely. But sure enough, after popping inside, the fiery, garlicky concoction was a revelation. Later that day, when I stepped into a seedy bar I’d walked by a hundred times before, it turned out that my phone was right again: there was a poetry slam going on inside. Suddenly, this neighbourhood I thought I knew well was full of surprises.

This is part of the charm of a new wave of mobile web applications—best publicized by the ubiquitous iPhone, but available on dozens of commonly available smartphones—that tell us more about our neighbourhoods than ever before, simply by relying on the people who live there. These applications promise to take previously scattered, separated bits of information and put them all in one easy-to-access place as they become more widespread. When you can walk down the street, quite literally holding the voices of a city in your hand, you get a step closer to realizing the elusive dream of urban diversity.

With web access and GPS now standard on most smartphones, there has been a torrent of location-based applications that tell you something about where you are right now. Among the most recent and talked-about arrivals is Foursquare (currently available for use in Vancouver, Edmonton, Calgary, Toronto, Ottawa, and Montreal). Partly a game meant to encourage urban exploration and socializing, Foursquare users “check-in” with their smartphones upon arriving at places like a coffee shop or a bar and accumulate points for doing so.

It’s all admittedly a little silly, but each location in Foursquare also includes suggested to-do lists. When you settle into a new spot you’re able to see other users’ recommendations. Though these recommendations are usually pretty straightforward, at other times you’ll find things you may not have even heard of. My favourite tip so far suggested that you ask your server for “the secret pink menu” at a certain restaurant. You could call it a new approach to urban discovery, one that takes the online mantra of “by the people, for the people” and mixes it with happenstance.

Or take Yelp, another popular application, which lists user reviews of everything from restaurants to dentists. It’s even more futuristic, in that it actually puts a layer of information atop the street image on your phone’s camera—listing prices, opinions and directions to similar establishments just by having you hold up your phone. It’s as if you were suddenly given a pair of glasses from the future. More importantly, services like Yelp provide something its print progenitors could not: serendipity. In the past, anyone with enough time and interest could tease out the secrets of a city’s hidden corners through alt-weeklies, travel guides, or ethnic newspapers. While those outlets are still great for providing alternative takes on urban life, they aren’t very good at aggregating all that difference.

After all, it hardly makes sense to write up the newest mainstream dance club in a small immigrant newspaper—not because readers wouldn’t be interested, but because too few would care enough to make it worthwhile. The economics of print means you have to cater to a very specific audience with very specific information.

In a way, those silos of knowledge help divide cities into disconnected parts by separating people into demographic groups and then only telling these groups about themselves. By instead relying on users of all stripes to share their own, unique knowledge, urban mobile web apps put far more of a city’s voices and perspectives on the same page.

Part of being a truly diverse city means allowing all citizens the potential to break out of their silos and experience the new. One way of going about this—maybe the best way—is simply to stumble upon new things; the mobile web does a much better job of allowing for serendipity because all the information is, well, there in your hand, waiting to nudge you at just the right time. The mobile web creates a kind of equity by aggregating information in one, more neutral place.

Sure, this is a little utopian right now. There is, after all, the minor problem of needing to have that fancy phone with a $900per-month bill (give or take). Never mind the fact that, just because these services exist, it doesn’t mean anyone has figured out how to encourage a truly representative sample of people to use them.

But what it does mean is that the potential is there. I’m finding things I never knew existed by wandering around my hometown with my face glued to my phone. So far, my discoveries have been relatively mundane—some hot sauce here, an unannounced event there.

But I also feel as if I’m being encouraged to move out of my comfort zone. Each time I timidly head into somewhere new, I’m running into both experiences and crowds that I haven’t before. If fostering true diversity is about allowing real cultural exchange, then maybe peering into our smartphones is actually a decent place to start.