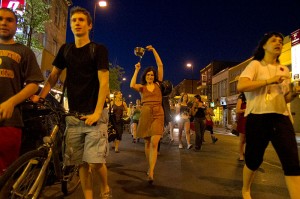 People march the street in protest of Bill 78. Photo by Francis Bourgouin

Talks between the student unions and the Quebec government broke down again last Thursday. Indeed, as the strike stretches well past its 100th day, it seems no end is in sight.

People from outside student union groups are now joining the cause in greater numbers than at any point during the strike—not so much in favour of the students but in frustration against Bill 78, an infringement on their civil liberties. Perhaps one of Saturday’s painted banner slogans said it best: “This isn’t a student strike, it’s a society waking up.”

In fact, Saturday’s protest was deemed illegal from its first steps onto the streets. Since protest organizers, CLASSE, Coalalition large de’Association pour une solidarite syndicale etudiante, did not provide the proper authorities with a planned route—as required under Bill 78—the protest was, according to law, unsanctioned and illegal.

Enacting a law that puts restrictions the students directly involved and the province as a whole has ignited the movement into something greater—something the government will not be able to manage. The protests that began with tuitions fees are no longer the same and they will never be.

Imagine this: Thousands of Quebec nurses walk off the job tomorrow in dispute over a proposed contract and decide spontaneously to march through the streets of downtown Montreal to protest. They didn’t call the police to give them a detailed itinerary and a map depicting their travel plans. This is a violation of Bill 78. But here’s what I’m wondering: Do the police arrest these nurses and start handing out fines? Unlikely.

On Tuesday, about 600 employees of Quebec Construction Commission—the regulatory agency for the province’s construction industry mired in the controversy over corruption—launched into a general strike. Since early May a number of intermittent strikes have take place. The workers have been without a contract since December 2009.

The Quebec Construction Commission, which is a member of Local 573 of the Canadian Office and Professional Employees Union, rejected the commission’s latest contract and voted in favour of a strike.

So what will happen to these employees if they decide they want to organize a march or demonstration? Well according to Bill 78, if they fail to inform the police of their intended route they may face fines that could amount to $1,000-$5,000 for individuals, $7,000-$35,000 for “student” or union leaders, and $25,000-$125,000 for organizations. There is something terribly wrong here, something the Quebec government failed to consider when enacting such a law. They have put themselves is a dammed if you do dammed if you don’t situation. And if the tuition debate is not settled soon, there is no telling where this might end.