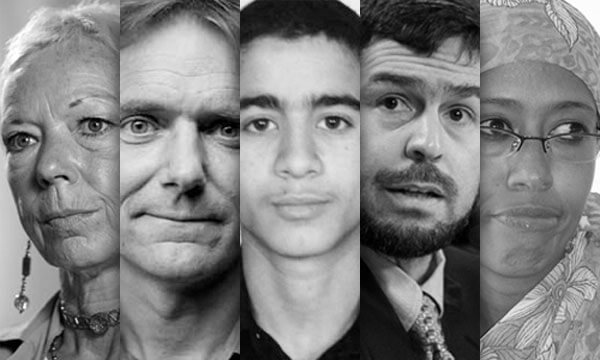 Some of these Canadians are not like the others. Left to right: Brenda Martin, James Loney, Omar Khadr, Maher Arar, Suaad Hagi Mohamud.

In November 2005, I travelled to Iraq in violation of a Foreign Affairs travel advisory. It was my third trip. Four members of an international delegation, including myself, were kidnapped and held by Iraqi insurgents for four months. One member of our group, an American named Tom Fox, was killed two weeks before we were released.

We knew the risks. The organization I belong to, Christian Peacemaker Teams, routinely sends people into dangerous no-go zones. It’s what we do: train international teams in the disciplines of non-violent, direct action to work with grassroots communities affected by violence.

Our work in Iraq included drawing attention to and documenting the arbitrary detention and torture of Iraqis, and supporting and training a Muslim Peacemaker Team. In the event of a kidnapping, CPT policy is very clear: no ransom will be paid and we will not accept or resort to using any kind of physical force to save our lives.

Thus, I expected nothing of the Canadian government when we were kidnapped. If we were released it would be through the non-violent efforts of CPT. If we were tortured or killed it would be our sharing in the terrible cost soldiers are routinely asked to pay in the course of serving their country.

I was astonished, then, to discover upon our release—a military rescue led by British special forces—that a team sent to Baghdad by the federal government had been working around the clock to secure our release, and Foreign Affairs and the RCMP had been in constant communication with my partner and family. The Canadian Forces sent a Hercules aircraft to fly me and my colleague Harmeet Singh Sooden out of Baghdad. Prime Minister Stephen Harper called to wish us well.

I couldn’t believe it. They came for me! Me, of all Canadians—an anarchist, a conscientious objector who had deliberately earned below the taxable income and not filed an income tax return for 10 years to avoid filling the military’s coffers. A government I would never vote for and completely disagreed with reached beyond politics to claim me.

Brenda Martin is another Canadian who knows what it’s like to be claimed. She was arrested in Mexico in 2006 and charged with participating in laundering and criminal conspiracy related to an online investment scam. She was found guilty on April 22, 2008, and sentenced to five years in jail. The Canadian government paid her $3,700 fine and flew her home in a chartered plane on May 1, at a cost of $82,727.

I am glad Brenda Martin was eventually helped by the federal government, just as I’m eternally grateful for the assistance provided to me and my family. But there’s a long list of Canadians in trouble abroad whom the Canadian government has either abandoned, ignored, or simply not seen.

There’s Omar Khadr, now 23, detained and tortured in Guantanamo from the age of 15, interrogated by CSIS, the only Western citizen who has not been repatriated. The government is appealing a court order requiring him to be brought home. There’s Abousfian Abdelrazik, detained and tortured by Sudan at Canada’s request, also interrogated by CSIS, and subjected to a six-year exile until a court order forced the government to let him come home. There’s Suaad Hagi Mohamud, stranded in Kenya for three months after immigration offi cials rejected her Canadian passport because her lips were “too thick.”

There’s Abdihakim Mohamed, a 25-year-old man with autism languishing in Kenya for the past three years because the government says he doesn’t match his passport photo. There’s Sacha Bond, a 24-year-old man with bipolar disorder, convicted of attempted murder in the United States for brandishing a weapon while off his meds and drunk. He was 19 at the time of the incident and no one was injured. And then, of course, there’s Maher Arar, Abdullah Almalki, Ahmed Abou El Maati and Muayyed Nureddin, all falsely labelled by CSIS and subsequently detained, interrogated, and tortured in Syria (in one case Egypt), with Canada supplying the questions.

They are part of an even longer list of Canadians in need of assistance. Who gets help and who doesn’t is a matter of “Crown prerogative.” That’s a fancy way of saying if the government likes you, if they see you as an upstanding citizen or a worthy innocent, they’ll go to bat for you. But if you have thick lips or dark skin, if you have a funny last name or you’re mentally ill, if you were born in a country with a bad reputation or if you yourself have a bad reputation, sorry, you’re out of luck. Some Canadian citizens count, it seems, and some don’t. Brenda and I must be among those who count.

My experience as a hostage has profoundly changed my thinking about the nature of government and citizenship. Governments matter immensely. What they do and don’t do, who they see or choose not to see, is of the greatest consequence—literally a matter of life and death. Governments at their best are powerful and essential vehicles of social solidarity. They exist to advance the common good, safeguard the environment, care for the sick and the elderly, nurture and educate the young—in sum, to serve and protect their citizens.

A citizen is a citizen, by definition an equal, subject of an inviolable covenant, entitled to the protection of the government. The integrity of citizenship is tested by its universality, and the test of its universality is in how well the least and most marginalized among us are protected.

It’s time that we reclaimed citizenship from the back rooms of Crown prerogative with legislation that obliges the government to offer consular assistance to every Canadian in trouble abroad.

The government needs be proactive and vigorously safeguard the rights of every Canadian, whoever and wherever they are. The lives of Khadr, Bond, Mohamed, and many more depend on it.

And, given that 4 million Canadians travel abroad each year, your life could well depend on it too.