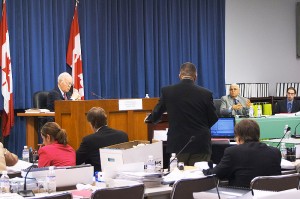 The Gomery Commission, underway in 2005. Sweeping Royal Commissions have fallen out of favour as governments fear they cannot control the outcome.

For the past six months, opposition parties in Ottawa and in Quebec City have been persistently calling for the appointment of Royal Commissions.

At the federal level, the demand has been for an impartial inquiry into the fate of detainees that Canadian troops turned over to local authorities in Afghanistan, and whether or not the Harper government was aware at the time that they were likely being tortured.

In Quebec, the Charest government has been under pressure to establish an inquiry into allegations of corruption and price-rigging at the municipal level over government construction contacts. More recently, and closer to the provincial government, there has been a call for a separate inquiry into allegations that the province’s $7-a-day childcare plan had been used in a “pay-for-play” scheme to benefit Jean Charest’s Liberal Party. Historically, Royal Commissions have been the right mechanism to deal with these sorts of issues, but neither the federal government nor the Quebec government has agreed to establishing them in these cases.

Canadian law gives investigating commissioners sweeping powers, including the authority to compel testimony, even from cabinet ministers, and subpoena documents, even those classified at the highest levels. And unlike parliamentary committees, which are composed of elected partisans, commissions are usually led by judges. These inquiries do not simply examine wrongdoing; history has shown that they often produce serious government reform.

Take, for example, the Glassco Commission of the 1960s. This was chaired by chartered accountant Grant Glassco and laid the groundwork for the complete reorganization of the federal government’s administration and practices, paving the way for professionalization of the public service and greater financial accountability. The Royal Commission on Bilingualism and Biculturalism paved the way for the Official Languages Act and for Canada’s multiculturalism policy, two initiatives that have been integral in making Canada a more egalitarian, pluralistic and tolerant society.

The Royal Commission of Inquiry into Certain Activities of the RCMP, dubbed the McDonald Commission after its chair, Judge David McDonald was sensational at the time, given its reports of RCMP officers infiltrating Quebec separatist political parties, and it resulted in the creation of the Canadian Security Intelligence Service. It also subjected it to a series of public oversight bodies such as the Inspector General of CSIS and the Security Intelligence Review Committee and, by extension, placed the RCMP under scrutiny from the Public Complaints Commission and the External Review Committee.

Compare those Royal Commissions to the ones conducted in the past decade—particularly the inquiry into the sponsorship program, chaired by Justice John Gomery, and the commission into the financial dealings of Karlheinz Schreiber and former prime minister Brian Mulroney, chaired by Justice Jeffrey Oliphant.

The Gomery Inquiry cannot lay claim to a single major reform of government policy or practice. By the time it was established the sponsorship program had already been shut down and the Chrétien government had already severely restricted corporate donations to political parties and established public election financing. The charges laid against the ad executives for falsely invoicing the government came out of an RCMP investigation which was started following an auditor general’s report.

What the Gomery Inquiry did do was tarnish the Liberal brand in Quebec, letting Stephen Harper’s Conservatives come to power even though the party is out of step ideologically with Quebecers in particular—something that additionally gave the Bloc Québécois a new lease on life and doomed Canada to a succession of minority governments.

The Gomery experience is why opposition parties salivate at the possibility of a new inquiry and make daily demands for its appointment. It is equally why governments now refuse.

While the Oliphant Commission was struck by the Harper government in response to news reports that Mulroney had received cash payments from German businessman Schreiber, the government was not putting itself at risk: only Mulroney was personally implicated, so had there been any surprising revelations, the risk to the current incarnation of the Conservative Party was minimal. Just to be safe, however, the Harper government gave the Oliphant Commission a very limited mandate. So its report, in May 2010, is unlikely even to get to the bottom of Mulroney and Schreiber’s relationship, let alone propose any significant reform of federal government policy and practice. The Oliphant Inquiry is simply about being seen to act.

Real commissions threaten governments, which is why they now reject them outright, despite the fact that in these two instances, they are badly needed. The military interventions Canada now finds itself increasingly embroiled in raise a myriad of legal and political issues that have never been properly debated. Not being an actual war, the rules of war don’t apply in Afghanistan and a country like Canada embarks on the mission without the requisite clarity of purpose. This goes beyond the fact that the people captured are not “prisoners” and yet are taken prisoner and thus are legally ambiguous. There are complex legal, moral, ethical, and strategic matters that deserve the sort of in-depth examination that only a Royal Commission can provide.

The same is true for something as seemingly mundane as construction contracting. The relationship between a municipality and the province, under whose constitutional authority a municipality is permitted to exist, has always been ambiguous. And the challenges of transparency in government contracting goes well beyond any one level of government.

These sorts of issues could only benefit from a public inquiry—but with governments of all stripes scared to start a process whose outcome they cannot control, Canadian public policy will suffer in the long run.