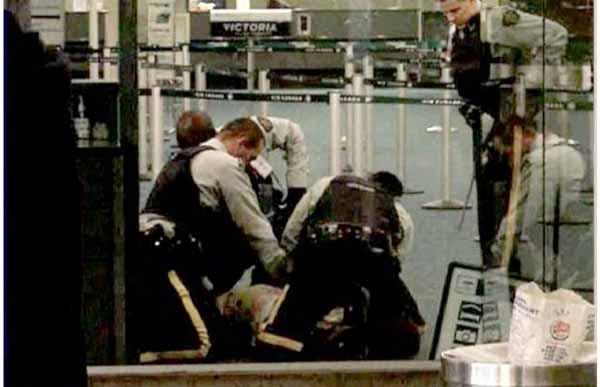 Robert Dziekanski being restrained by RCMP officers in Vancouver International Airport, October 14, 2007, in amateur video of the incident.

The Robert Dziekanski case—in which the unfortunate victim, a non-English speaker who died at the Vancouver airport in 2007 after being Tasered by RCMP officers 24 seconds after they arrived—continues to play out at the Braidwood Inquiry. On Tuesday, RCMP superintendent Wayne Rideout told the inquiry that having RCMP officers investigate their own colleagues presents an “unwinnable” image problem, reports Ian Bailey in the Globe and Mail:

The optics of police investigating themselves in such cases as the death of Polish immigrant Robert Dziekanski presents an “unwinnable” image problem, the officer in charge of the investigation into the Dziekanski case says.

First of all, we already know that the RCMP is lousy at investigating wrongdoing by its own members: the Commission for Public Complaints Against the RCMP already nixed that idea in August, with a report that found deep and troubling problems with the RCMP’s internal investigation procedures. Second, having law enforcement officials investigate their own colleagues in cases where civilians or suspects have died is not simply a problem of “optics” or “image.” The reason it appears rotten is because it is. The potential for miscarriages of justice, sloppy or willfully incomplete investigations, and full-bore coverups is too great when conflicts of interest like this are allowed to continue.