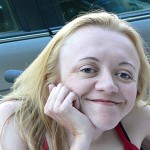 Dianne Trottier, a 33-year-old tenacious journalist killed by a hit-and-run driver while crossing the street in her electric chair. CANADIAN PRESS/CBC

While cyclists in Toronto rallied to remember Darcy Allan Sheppard, the cyclist killed after allegedly being dragged along Bloor St.  by a car driven by former Ontario Attorney General Michael Bryant, another car accident was causing comparative degrees of outrage at the eastern edge of the country…

and this one embodies my worst fear.Toronto resident Dianne Trottier was described as  “feisty” and “outgoing” whether she was chasing down a story as a producer for CBC News: Around the World, or chasing accountability when it came to disability issues. While crossing a crosswalk in Fredericton, New Brunswick on Aug. 29,2009 in her electric wheelchair, she was hit and killed instantly by a hit-and-run driver.

While it has me shaking my head that this senseless tragedy was made worse by a driver who was cowardly enough not to stop and face the music, I found myself knowing full well that this could have just as easily been me. It was a deep-in-the-bones realization.  The type that strikes you in the middle of the night as a single-digit-age kid, when it suddenly dawns on you for the first time that one day, any day, by virtue of the fact that you are a living being, you will die and there is nothing you can do about it. I’d call it a kind of out-of-body chill.

Trottier’s death just reaffirmed something I’ve always felt with some certainty since I moved to Toronto in August 2003. If Vegas odds-makers were taking bets on the circumstances of my death, the line on “Getting Hit by a Car While Navigating a Crosswalk” has got to be 2:1. After all, I’ve had so many close calls already.

I’ve lost count of the number of times a car has turned into the middle of the crosswalk, while I’m half way to the other side and the walk sign is on. So many times I look up only to find some dumbfounded, apologetic driver behind the wheel, while I’m thinking about lodging my cane through his windshield.  What about those times a car has sped through the crosswalk without looking back as I’ve already started my journey. Luckily, they’re close enough to shave the hairs off my chest, but that’s all. Had I been going just a little bit faster, I could have been the next casualty, just like Dianne.

Patience is a virtue, but so few drivers actually use it. Combine that with the fact that scooters  and electric chairs are silent, have low visibility and are lower to the ground than a bike or a pedestrian and you have a wicked recipe for street pizza. Don’t even get me started on what happens in cases where the battery happens to be low on power—that’s when you really start to put your life in God’s hands. Plus, just because cars yield for you on one side of a crosswalk, doesn’t mean cars in oncoming lanes won’t try to overtake them. My friend told me this is illegal, but you wouldn’t know it on Toronto’s streets. What about the guys who force pedestrians to bob and weave between the cars because some driver finds himself parked in the centre of the crosswalk? Some drivers even make it worse by backing up into the car behind them to try and let you through, only to exacerbate things thoroughly.

I’m so afraid, that when crossing the street with able-bodied people, I find myself on the inside lane. I figure the more able-bodied pedestrians I can put between me and oncoming traffic, the better the chances a car will hit them first and their bodies will shield me slightly from impact.  So if you’re walking with me and I let you step off the curb first, it’s probably because I’ve set you up to be my sacrificial lamb in case of emergency.

I learned pretty early on that sometimes survival of the fittest doesn’t necessarily refer to physicality.

While cyclists fight for more bike lanes and respect on Toronto roads, unless something in Toronto traffic changes, the next time you see me I may be splayed out between the yellow lines under a white sheet.