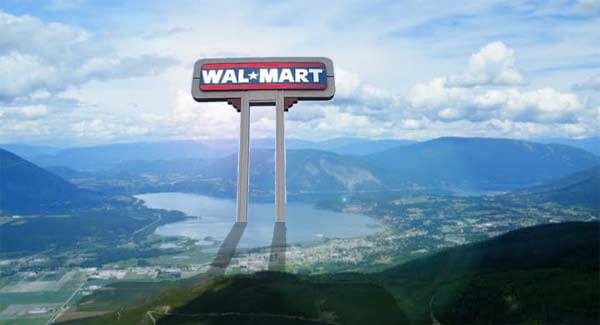 Wal-Mart: paving paradise and putting up parking lots since 1962.

In Salmon Arm, B.C., there’s been a long-standing fight over plans to build an enormous shopping centre directly on the floodplain of the Salmon River. Last fall, the city voted not to allow mall developer SmartCentres to build big box stores on this ecologically sensitive tract of land. Well, now we receive a report that a few days ago, SmartCentres started building anyway.

In essence, a giant developer (SmartCentres, based in Vaughan, ON, if you want to look them up) wants to build a giant Walmart-anchored shopping centre on a giant parking lot planned for the middle of the floodplain of the Salmon River, which enters Shuswap Lake within the boundaries of Salmon Arm, and supplies most of the water to the Salmon Arm of Shuswap Lake (which has 4 arms, like a giant chromosome), from which the town draws most of its water. The floodplain/wetland complex filters and cleans the water. And yes, there are several species of salmon slowly returning to the Salmon River, after nearly 20 years of local volunteer restoration work.

Last fall, SmartCentres came at this project, and were defeated narrowly by a vote of City Council. Now they’re back with a vengeance. Two days ago [on Friday, September 4], without waiting for government approval, they began dumping fill all over the floodplain.

I’m president of a small group of local citizens, called WA:TER (Wetland Alliance: The Ecological Response) leading a resistance movement against this proposal — not against development, but against development there. We’re struggling along in more or less “David and Goliath” mode, and now have our backs to the wall, because the developer is moving ahead before Dept of Fisheries and Oceans has said they can.

You know the story: wreck the ecosystem, pay the fine (the “cost of doing business”), and carry on building.

If this story weren’t so sad, it would almost be funny—it features so many clichés of real-estate development hell: the Wal-Mart rolls into town, dumps landfill all over a fragile wetland, and paves the whole thing with a parking lot. The only thing they’re missing here is a moustache to twirl while cackling in the shadows.

I’ve got a call in with SmartCentres to confirm that construction has started. I’ll update this post with their response if and when I hear back.