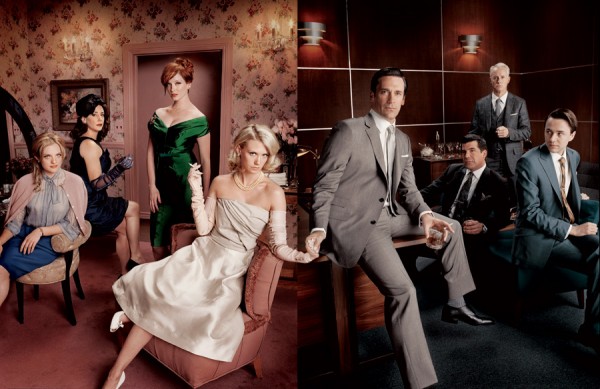 Mad Men is a hit. But are its ideas retrograde?

I’m a fan of the AMC series Mad Men, which premiered its third season last night. The show has always occupied an awkward cultural space, both fetishizing and pathologizing its subjects: meticulously styled and artfully shot, it depicts a glossy, nostalgic vision of the early 1960s in America, but continually undermines that nostalgia, exposing the cruelties, inequities, injustices, and hatreds that flourished at the time—and many of which still do.

I enjoy watching the show—it’s some of the most assured and polished storytelling on television right now—but I feel ambivalent about it, too. At what point does showing, and commenting on, the retrograde worldview these characters live become an endorsement for it? Can you separate the aesthetic aspects—the jet-age furniture design, the architectural hairdos—from the social, political, and ethical environment from which they emerged? When I hear people talk about the show, it’s the clothes they seem to focus on: Betty Draper’s dresses, Don Draper’s grey flannel suits, the men in hats and trenchcoats, the women in gloves. I think the fashion is the least interesting part of the show; It’s the social context, glimpsed in fleeting but crucial moments, that gives Mad Men its tension, vibrancy, and meaning. The show’s strict adherence to period detail—the black washroom attendants who go tipless as their white clientele glide past; the sad marriage of frustrated closet-case Salvatore; the secretary-pinching and child-slapping and litterbugging; the pandemic alcoholism—often ends up perpetuating, or at least sanitizing, many of the same cruelties it is supposed to be demolishing.

Latoya Peterson has been doing some thought-provoking writing at Racialicious recently on Mad Men, and how the show’s treatment of black and asian characters is nearly as retrograde as that of its characters:

Are people so conditioned to ignore black narratives that any representation will do? And are people so accustomed to commentary about race coming in broad, heavy handed “racial moments” that we will ignore the lack of nuance used to portray the lives of axillary black characters?

There have been a handful of “racial moments” on the show, but it’s of the black elevator-attendant/jewish mailroom boy/sexy-geisha-waitress variety, quick cuts, and often used for comedic relief, since modern audiences supposedly know better than to buy into such ideas. But what it means functionally is that Mad Men is a show steeped—suffocating, sometimes—in whiteness.

There’s also been plenty of chatter about whether Mad Men is “feminist” because it features some women in empowered roles, a kind of prelude to the women’s lib movement that we know is coming down the road. Tom Matlack wrote in the Huffington Post in July:

As it turns out the creator of Mad Men views his show as a feminist show exactly because of its painfully accurate portrayal of the treatment of women in the workplace in the early 1960s. Weiner told me the highest praise he ever gets is when a woman approaches him after a public appearance to say she was a secretary during that era that era and the show got the sexual harassment exactly right. They always thank him for putting a spotlight on what really happened.

I suppose “getting the sexual harassment right” is a kind of accomplishment. Jezebel fleshed out the argument with 15 “feminist moments” from Mad Men. Again, in most of those cases, such as “It looks complicated, but the men who designed it made it simple enough for a woman to use,” are intended as comedy for modern audiences, but again, the ambient misogyny of Sterling Cooper often feels (literally) oppressive. 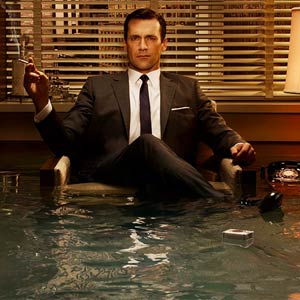 Having started its story in 1960, Mad Men started with certain necessary qualities: misogyny, racism, homophobia, and so on. I hope, and assume, that the story, now progressed to 1963, is poised to change its tone on many fronts, as the culture wars of the 1960s seep in. The ad campaign for this season, with Don Draper’s office waist-deep in water as he smokes, oblivious, hammers the point home. Frank Rich summed up my feelings in his Saturday New York Times column:

What makes the show powerful is not nostalgia for an America that few want to bring back — where women were most valued as sex objects or subservient housewives, where blacks were, at best, second-class citizens, and where the hedonistic guzzling of gas and gin went unquestioned. Rather, it’s our identification with an America that, for all its serious differences with our own, shares our growing anxiety about the prospect of cataclysmic change. “Mad Men” is about the dawn of a new era, and we, too, are at such a dawn. And we are uncertain and worried about what comes next.

That’s why, despite my misgivings about the politics of Mad Men, I’ll keep watching. On the show, as in real life, a change is gonna come.