The New Democratic Party convenes today in Halifax for its federal convention, and one of the hottest questions is whether the party will drop the “New” from its name. Sure, there’s a bunch of boring old policy meetings and stuff, to, you know, lay out a vision for the country and junk, but there’s something irresistible about the razzle-dazzle of a rebranding. Nick Taylor-Vaisey jumped on this story weeks ago, way before the mainstream media caught on, but now everyone’s got an opinion.

Anyway, the reason I’m filing this under our cheery Friday FTW section is that it actually has shoved Canadian progressive politics into the spotlight again, which is crucial. (I’ve reposted James Laxer’s important and controversial This cover story from last year on the future of the NDP, just to stoke the fires a little more.) The prospect of a name change has fostered some important talk in progressive circles about what exactly we want from a left political party: do we want uncompromising, principled ideological stances, regardless of the electoral outcome? Is it actually important to pursue power? Are these goals mutually incompatible? Have we been seduced by the success of the Obama electoral machine and just want to grab some of that excitement for ourselves in Canada? I don’t know, but I’m sure glad we’re talking about it.

The nice thing here is that there have been all kinds of useful, necessary questions asked, and the stakes are actually pretty low at this point. Judging by a hilarious poll commissioned by the Canadian Press and released yesterday, it really doesn’t matter: 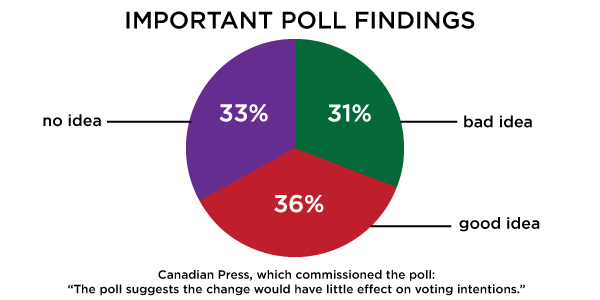 Of about 1,000 Canadians surveyed, about one-third each believe the name change is a good idea, a bad idea, or just don’t give a shit. Practically no votes ride on the decision; if there’s a name change, lefties aren’t going to flee the party, and righties aren’t going to flock to it. In other words, maybe we can get the whole name-change thing out of the way, whatever the decision is, and talk about the truly important issues.