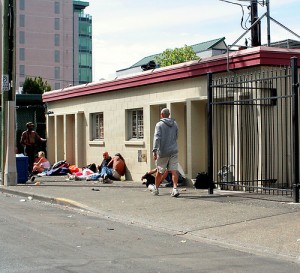 Insite provides a vital service for the most marginalized. From Flickr.

A few days ago, a deadline with potentially enormous consequences passed very quietly. Thank goodness. It was June 30th, the day a court order to save Insite – Canada’s only safe injection site for heroine users – was due to expire. Fortunately the government agreed to extend the exemption and allow the facility to continue operating until the B.C. Court of Appeal renders a decision on Insite’s future in the next couple of months.

But for Insite, this is a reprieve and no salvation. The case the plaintiffs have launched in an effort to save the Vancouver facility is a bold one. They argue Insite’s exemption from anti-drug laws isn’t just a good idea; it’s constitutionally protected by the charter right to life, liberty and security of the person. Shut Insite down, they warn, and drug addicts will die. To make their case, they cite the federal government’s own 2008 report. It found that 87 percent of IV drug users on the downtown east side were infected with Hepatitis C and 17 percent with HIV-AIDS. Nearly 60 percent had had a non-fatal overdose – meaning the next time they might not be so lucky. The government side replies, however, that drug laws are reasonable and necessary given the harmful effects of drug addictions on society overall.

Even if Insite wins the appeal this summer, the Conservatives have vowed to take the case to the Supreme Court. This means months or possibly years of legal purgatory for a place that was supposed to be, of all things, secure. And as the legal battle continues, the Conservative PR machine has already started spinning the line that courts are apolitical bodies with no business interfering in the decisions of popularly elected officials on this controversial issue. Let’s pause for a second and ask, what if they’re right? Ultimately, Insite’s future doesn’t depend on a charter right. It depends on funding. And courts forcing the government to fund services is tricky at best, invasive at worst.

Insite has received widespread admiration from national and international civil rights, medical and law enforcement organizations. It is considered the gold standard in addiction treatment. There has never been a single fatal overdose on Insite’s watch. For a group of drug addicts on Vancouver’s east side, that isn’t an accomplishment. It’s a miracle. Moreover, according to the Conservatives’ own polling, 60 percent of Canadians support safe injection sites. The legal case in favour of keeping Insite open may be close, but the political one shouldn’t be.

As Canadians, we rightly celebrate the role courts have in protecting minorities when no one else wants to. But that shouldn’t stop us from fighting long and hard and loud in the political arena . Whatever the courts decide in the next couple months, let’s hope the public outrage is so resounding that the government has no choice to keep Insite open – if not as a question of justice, as a question of politics.