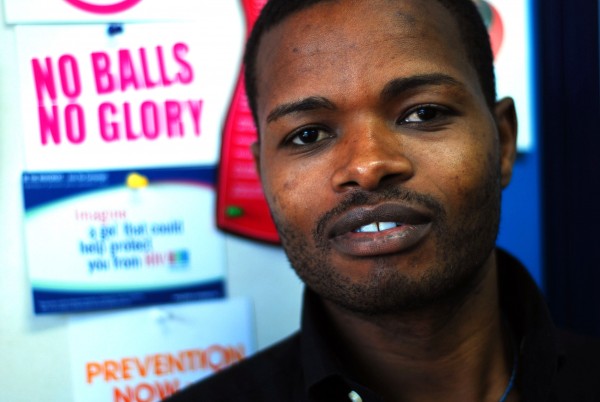 John Mathenke, a Nairobi sex worker, was diagnosed with HIV in early July. He has gone public with his story and started a health education organization to help other young gay sex workers avoid contracting the disease. Photo by Siena Anstis.

Such is the life of a homosexual prostitute in Nairobi, Kenya. “It’s better to be a thief than a gay in Kenya,” he says. Both are often punished by death, but being the latter means never revealing yourself to the public and remaining perpetually closeted. It means dealing with homophobes at day and pleasuring them at night.

Mathenke, a quiet-spoken young man, is forthright with his story. His gay identity has not been shamed or hidden by years of abuse. His ability to tell his intimate story to a stranger is testament to his bravery. He tells me that he wants to be openly gay – and to help those who want to do the same – in a country where all odds are stacked against him.

His forced silence is not only affecting Kenya’s gay population. According to the BBC, gay men in Africa have 10 times higher HIV rates because of homophobia. These gay men often have “cover wives” who are also eventually affected by HIV. It’s a vicious cycle in a country where the government has proved reluctant to address the mental and physical repercussions of homophobia.

In 2002, Mathenke left his poor community and followed other dream chasers to Nairobi. He paid a barber $30 to be trained as a haircutter. His perfect English eventually landed him a job selling textbooks in a lavish Westlands shopping center. This was the scene of his first same-sex experience. While, subconsciously, he knew it had always been a part of him—he says he used to wear long shirts when he was small and tied a rope around his waist to pretend it was a dress—he had never experienced sex with a man.

At this time, Mathenke was discovering his sexual identity and decided to move to Mombasa, an area rumored to be less hostile to gay relationships. $700 in his pocket, he put himself up in a hotel. Eventually the money dried up and he was left desperate. He went to Mercury, a local bar, and was offered money for sex with an older European.

“When you’ve had sex with someone once, they don’t want you again,” explains Mathenke. Customers became few and far between and he continued to sleep on park benches, washing in the seawater in the morning. He also faced continued stigma: “Arab traders would insult us at day, and come looking for sex at night.” A lot of his clients were—and are—popular religious leaders who would curse homosexuals in public and find pleasure in paid homosexual company in private.

Mathenke eventually returned to Nairobi, where he settled in with a new boyfriend. He continued to see clients from the big hotels: the Hilton, the Serena, the Intercontinental. He had yet to use a condom.

Community outreach by Sex Workers Outreach Program (SWOP) in Nairobi eventually led him to his “second-home.” Provided with free health services and counseling, he tested positive for HIV/AIDS three weeks ago. So did his partner. Instead of bemoaning his future, Mathenke has launched himself into a new project. He is bringing together groups of young gay sex workers and helping them form an advocacy organization, Health Options for Young Men on HIV/AIDS. He is teaching these young men—some only 12 years old—about using condoms and lubricant when having sex with men.

Mathenke’s work is necessary. Many of the bars and hotels on the coast and in Nairobi are, by default, gay bars. The men frequenting these places pay off the police so that they’ll be left alone. But violent raids continue to happen. At the same time, homophobia ensures that these men are never reached by HIV/AIDS awareness. Changing public behavior is key to lowering the HIV rate and protecting all Kenyans, gay or otherwise.

While the government has long been reluctant to address the role of homophobia in increasing HIV/AIDS rates, there have been some positive changes over the years. Gloria Gakaki, a social worker at SWOP, highlights the brave role of Dr. Nicholas Maraguri, Head of the National AIDS and STD Control Programme (NASCOP), who is pushing the government to address HIV among Kenya’s hidden gay populations. Maraguri has also been meeting directly with male sex workers to get a more in-depth idea of what their problems are, and how government can help.

For further information on SWOP or to donate to Mathenke’s new organization, please contact Gloria Gakaki at [email protected].