Publishers, libraries co-operating to get locally published e-books into the public’s hands

If the Association of Book Publishers of B.C. gets its way, the province’s libraries will be making a major acquisition this summer without gaining any weight. The association’s Best of B.C. Books Online project plans to purchase electronic rights to a collection of some 1,000 non-fiction titles from British Columbia publishers, which will soon be made available for free in schools and public libraries across the province. 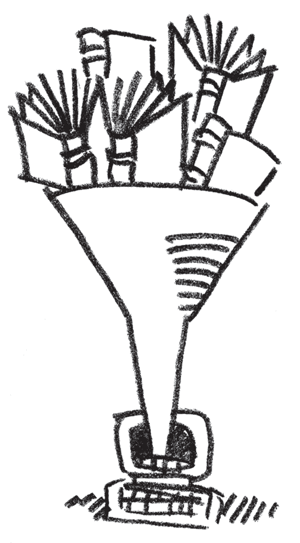 1,000 B.C. books in your pocket. Illustration by Dave Donald

As one of the first such projects in Canada, Best of B.C. Books Online has the daunting task of navigating the myriad legal and mercantile ambiguities of e-book distribution and sharing. “This is a pilot project in a bigger sense, that we’re setting some kind of standards with this project in Canada,” says Margaret Reynolds, executive director of the Association of Book Publishers of B.C. There are many details still to be negotiated between the libraries and publishers, such as the cost of electronic rights, whether they will be bought with a one-time purchase or an annual fee, and how much text readers can copy or print from these files.

Further complicating the project is the print publishing establishment’s wariness of e-books. Their concerns hinge on the risk of piracy, those of an unfamiliar marketplace, and the challenges of incorporating new technologies into their practices. E-books have yet to catch on with the public, but the success of the Amazon Kindle ebook reader in the U.S., and internet giant Google’s prospective settlement with the Writers’ Union of Canada over digitization rights to authors’ works shows that changes are afoot. Publishers are looking to futureproof their business, even if a full strategy isn’t yet clear.

Paul Whitney, the city librarian at the Vancouver Public Library, thinks the book industry is now where the music industry was 10 years ago, when fear of piracy made record companies hesitant to adopt new distribution methods. “Now the music industry understands that the notion of restricting content to one platform means it’s not going to succeed in the marketplace.”

At a time of crisis in the publishing industry, the Best of B.C. Books Online, which will go live in the summer of 2009, wants to ensure that Canadian content doesn’t get lost in the scramble to create a new model for the industry. “We want this to be a success story,” says Whitney, “with more Canadian content being available, more revenue for Canadian publishers, and more people accessing these Canadian books.”