This June, York University student Fred Metallic hopes to make a bit of Canadian university history. That’s when he plans to complete the first draft of his PhD dissertation, tentatively titled “Mi’gmawei Mawio’mi: Goqwei Wejguaqamultigw?” (The English working title is “Reclaiming Mi’kmaq History and Politics: Living our Responsibilities.”) Written entirely in Mi’kmaq, it will be the first PhD dissertation in Canada completed in an aboriginal language without translation. 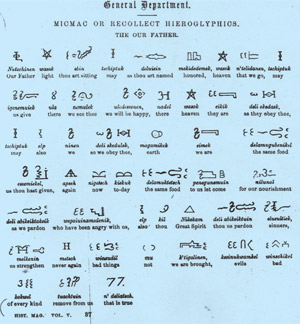 It will also be York’s first dissertation written in an aboriginal language. Until last fall, the school had only allowed PhD works in English and French. But after seeing what Metallic had done for his comprehensives, it agreed to allow him and any other student to present a thesis or dissertation in an aboriginal language, without translation, provided they have committee support.

It’s a decision that Anders Sandberg, associate dean of the faculty of environmental studies at York and one of Metallic’s advisors, hopes will “accommodate aspirations of the First Nations community.” He explains that the university agreed not to require an English version because, in Metallic’s case, his work directly relates to the Mi’kmaq community and an English translation would not assert the value of the language, and it could not convey the same meaning.

So far, one other student has decided to follow in Metallic’s footsteps. Diane Mitchell, who will be presenting her master’s thesis in Mi’kmaq, says that to study her language and culture through the filter of another would not be “aiding and abetting” her language. “To go to a university and study my language or my culture and do it in another language would be pointless.”

However, not everyone is impressed by York’s new initiative. “There’s nothing wrong with composing something in one of the languages,” says John Steckley, the sole speaker of Huron and a professor at Humber College, but “how do you then extend it to a wider audience, even a wider Mi’kmaq audience, because the vast majority of people don’t speak the language?” With what he estimates to be only 20,000 to 40,000 Canadians able to speak an aboriginal language, Steckley sees the need for a “middle document” that at least gives a sense of what’s being communicated and how difficult translation is.

Still, with these languages rapidly on the decline, York’s acknowledgement of aboriginal languages may encourage other educational institutions to do the same.

After all, points out Mitchell, “I do feel that a lot of aboriginal everything has been treated more as a curio than as something real, and to me this is how you make something real. You incorporate it into things that are valued.”