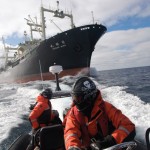 I just posted Emily Hunter’s feature story from the May-June 2009 issue, because it has some bearing on the current controversy over the EU’s banning of commercial Canadian seal products. Trade Minister Stockwell Day says Canada will take the issue to the WTO to try and force the EU to accept Canadian seal pelts, furs, and Omega-3 pills derived from the hunt. About 6,000 people in Newfoundland and Labrador make a substantial part of their income from the annual seal hunt, which kills 300,000 seals per year, and is condemned by animal rights groups for the cruel methods used.

The indignation in Canada over the EU’s decision has been, on the surface, about the economics of the decision: it will hurt the livelihoods of Canadian hunters, many of them Inuit. Whatever your opinion of the cruelty of the hunt—and I’ll be honest, the notion of clubbing an animal to death strikes me as the definition of cruel—this ban will throw people out of work or substantively lower their income in a province that needs jobs more than ever, and that’s a problem.

But it’s not really about economics: this is a sovereignty issue, about whether the EU gets to effectively shut down a foreign industry its members don’t like. Because frankly, the amount of money involved here, about $5.5 million worth of seal products that Canada sold to EU consumers last year, is a miniscule fraction—by my back-of-the-envelope math, about 0.0005%—of total Canada-EU transatlantic trade ($111 billion in 2008). As Emily explains in her article, Japan is in the same boat: the whale hunt there has no real economic impact: the actual market for whale meat is tiny, and the producers make almost nothing selling it. But despite the economic lunacy of sending all these ships around the world for a grand total of $51,000 profit, it continues because Japan doesn’t want to accept the authority of the international community that has declared whaling unethical, unnecessary, and cruel. In both cases, the verdict is in: whaling and sealing are not really viable businesses, but both countries persist in their nationalist posturing out of what seems to be pure stubbornness. There are other ways to help the people whose jobs are at risk, ways that don’t require Canada to mount a complex, longwinded, and no doubt expensive appeal to the WTO.