Before my son Louis could walk, he could surf. He took to the internet like an aquatic creature, swimming easily and confidently. It was cute to see him perched at the computer, his big baby head topped off by a pair of giant headphones. But his avidity made me uneasy, a disquiet that lingers still, when I hover over his shoulder trying to see what he’s watching, making, understanding. 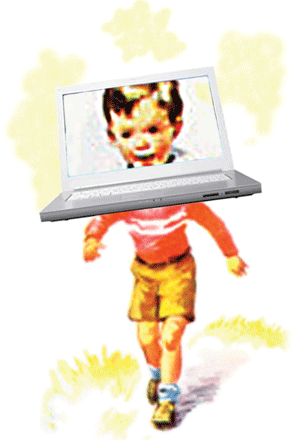 I come from a generation of watchers — of movies, of TV — but Lou belongs to a generation of makers. Even though he’s only seven years old, already he’s leaving me behind, moving from consumer to creator, making and posting videos of his Lego men, swimming in a vast sea of video clips, remixes, parodies. To him, culture isn’t a static thing to be passively imbibed, but something to act upon; not an inviolate product, but simply material. As much as I admire the next generation’s digital fluidity, I miss the bigger picture — something that isn’t cut up, sliced into bits and pieces. More importantly, I worry that Lou will miss it also.

The break between the emerging culture of the empowered creator and the old-fashioned passive consumer is the subject of Brett Gaylor’s award-winning documentary RiP: A Remix Manifesto. RiP picked up the 2008 Dioraphte Audience Award at the International Documentary Festival Amsterdam and is being released this spring online and in theatres. The subject of the film is how current intellectual property laws affect the culture being made by a new generation. The copyright debate is something of a Wild West show at the moment, and no one embodies that spirit more fully than a musician named Gregg Gillis, who records and releases under the name Girl Talk. Gillis combines hundreds of samples from other artists’ songs into mashups, and in so doing, risks lawsuits, prison time, and massive fines. The film uses Girl Talk as a test case for current copyright laws, but also poses fundamental questions about how new forms of culture always need to build, borrow, or outright steal from the past.

In one of the film’s more thought-provoking segments, Lawrence Lessig, the Stanford law professor and founder of Creative Commons, argues that overreaching copyright laws have strangled creativity and eaten away at the public domain in the name of money and control. Despite lawsuits and penalties, people continue to rip, remix, and sample with gusto. After all, Lessig argues, the desire to play along is a natural form of creativity. And to punish or outlaw such a manifestation is tantamount to creating a generation with no respect for the law. (Lessig’s talk, included in the film, is available online at ted.com.)

I think Lessig is right about the importance of sharing ideas, but my misgivings linger — not just about how material is used, but how it’s perceived. It’s not because I’m afraid Louis will get sued one day. It’s because when films are simply something to be cut up, reworked, made into goofy commentary, and viewed ironically, I think something is lost. The ability to follow a sustained narrative has been fundamental to human nature, but it’s been so fractured, so chopped into small pieces, that it sometimes seems in danger of disappearing.

Louis informed me the other day that YouTube was better than TV and movies because you could watch whatever you wanted, and no one made you watch something (like ads) that you didn’t want to see. Here I am in danger of dating myself terribly, but this makes me think about how the medium carries the meaning. I am reminded of what it once was to listen to records. The A- and B-sides, the sequential tracks, formed a journey — and to interrupt this process was to miss the larger impact. You were meant to move in a linear fashion, from beginning to end.

That straight-line mentality has been disrupted, and not simply because there is often no top or bottom, no beginning or end, on the internet. When the larger arc is missing, the fundamental nature of story can change, becoming smaller and less affecting.

But the loss of the experience of sitting quietly in a darkened theatre to watch a movie — something I still love, but can’t truly share with my son — makes me sad. My experience has been shared by countless parents, who watch their children launch into some new world we can only fleetingly grasp. All we can do is wave goodbye from the shore, as they swim away.