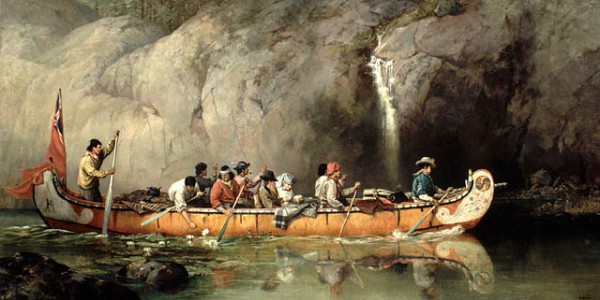 Gorgeous she was. Stunning. He followed her, followed her the way a down-and-outer, in raw weather, follows a dark-suited businessman smoking a cigarette. Not to pounce on the butt, which will almost certainly be crushed under a thin-soled Italian shoe, but simply for the nostalgic, soothing turbulence of smoke.

She stumbled. He made a move, instinctively, toward her. She caught herself, looked at him disdainfully, as a store owner might look at a shoplifter having second thoughts, putting the box of Whippets back on the shelf.

And he, whose optic nerve was wired to the speech centre of his brain so that he could not make eye contact without instantly verbalizing, said, “Excuse me, please, I am afraid I am lost.” His French accent stained the words so they came out, “a’ am afred a’ am lust.”

The young woman could not help smiling at this reaffirmation of the mysteriously amorphous fact that she was unfailingly asked for directions when, but only when, she was in an unfamiliar place.

“You look lust,” she said, deferring the harmless and yet deflating admission that she was not from Montreal either.

“I am looking for the Museum of the Fur Trade.”

“Oh. Well, you’ve come too far. You’ve got to go back along Saint Joseph to the canal, past the yacht club. It’s an old stone building with two wooden doors.” She knew this because, and only because, she had just finished visiting the museum herself.

“But you speak very fast for me.”

She repeated herself, spacing the words, pronouncing them with exaggerated clarity, reinforcing them with hand signals that allowed, indeed obliged, the man to remark the curve of her forearm, which was like that of a theoretic and perfect air foil. He observed that her skin was inlaid with a mosaic of freckles barely darker than the skin itself, giving it the appearance of sand drying after rain. That she had a mole under one eye. Not a blemish, not at all, but a pledge of vulnerability.

“Sure I do.” He attempted to convey the impression that he was doing his best to disguise his continuing perplexity.

“Oh, I think I might already be fairly well deranged. And it’s really no problem. Otherwise I wouldn’t offer.”

And so they walked together. Not quickly.

“It’s terrible,” he said, looking out over Lake Saint Louis, which was vast and choppy, “to think that men put canoes in the water here. Just small canoes. To cross all Canada.”

“Maybe they stand here, right where we are, here, when there were trees, and have one last piss.”

He had found the right tone. The young woman was clearly struck by the playful immediacy of the thought. She could not resist a quietly dramatic surge. “Les voyageurs,” she said softly.

“But you say that perfectly. You speak French then. Tu parles français.”

He noticed that when, as now, she blushed, her colour-fast freckles appeared very pale, relatively.

“So how long,” she said quickly, beginning to walk again, “have you been in Montreal?”

“Your English is very good.”

“I didn’t learn in two days! You are laughing of me. I knew it before. I have been learning in school since Grade Five.”

“Oh. I wouldn’t have thought they’d teach English in France necessarily.” Neither, of course, would have he. But how, given that she had erroneously concluded he was from the mother country, could he refuse such an open invitation to appear interesting, to indulge in the thrill of duplicity?

“I am, yes.” It was his turn to redden. She liked this. She had noticed that those who had a tendency to blush when they talked about themselves had, generally speaking, little reason to do so.

“Now I understand why you’re interested in the voyageurs.”

He wondered if he would not have found her more beautiful still if she had not believed him.

“And you,” he said, “you have lived always in Montreal?”

She had answered quickly, to give herself time, her mind was racing, it would have been simpler, perhaps, just to have said that yes, she had always lived in Montreal, but she did not really know the city, she had never been anywhere in Canada outside Quebec except Toronto, and she refused to say she was from Toronto. She did go frequently to the United States, Vermont in particular, Burlington, and he could know nothing about Burlington. But her silence was growing between them, over them, like the vine that grew over the walls of her parents’ house, covering the windows, weakening the frames, letting in the rain.

“My name is Texas,” she said suddenly. “I was born near Austin.”

“I have a brother. Toby? His real name is Manitoba.”

“My father’s an airport architect. He helped design the airports in Austin and Winnipeg. He used to say, ‘They name dinosaurs after the places they discover them, don’t they? Why not children?’”

“I must meet this father. How are you, Texas.” He bit into the name as though it were a piece of angel food cactus. “My name is Paul-François.”

She was exhilarated by her inventiveness, delighted with Paul-François for drawing it out of her, almost grateful. She was deciding she might call herself Texas forever. She did not, in her enthusiasm, notice that his difficulties with her English seemed to have largely resolved themselves.

And he had never felt so western, so released from the parish of his Quebec. He was thinking that the reddishness of Texas’s hair was not unlike that of tall grass in mid-November. He was already imagining himself flying with her over endless plains of the same reddish grass, the two of them looking out a sunlit portal, and Texas saying that it was over plains like that that she rode as a young girl.

“And what is it you do, Paul-François?”

“I am a artist. I paint.” It seemed more truthful to continue lying. But no sooner had he said the words than it struck him that Texas herself might be an artist, and not only that she might be, but that she must, could only be. His lungs seized with panic.

“That’s so really I mean, I know absolutely nothing about art.”

He had barely enough breath to say, “Neither do I.”

And so they stood next to a mannequin wearing a red toque and furs, whose plaster face revealed not the slightest sign of strain or even effort despite the fact that the mannequin was snowshoeing in deep, Styrofoam snow and bent under an enormous load of pelts wrapped in canvas. They watched a National Film Board documentary short that, judging by its visual quality, had been running without interruption since the museum first opened in the 1930s. The film was narrated by a reboant bass voice that sounded like it was home to a nest of termites. It showed vigorous men retracing the route of the voyageurs in authentic canoes, paddling with light-hearted, staccato strokes up the Ottawa River, over Lake Nipissing and Georgian Bay, and it celebrated a Canadian wilderness that, however majestic, could not prevent itself from dozing off repeatedly and slipping out of focus.

Texas, who was watching the film for the second time that day, was invoking the spirit of the voyageurs, in the person of the mannequin, to funnel the course of her life and that of Paul- François into the same, free-flowing current. She knew that although the present moment would necessarily end, its echo would continue. Her heart was moulting, breaking through its old skin. It was a Texas heart now. She would call herself Texas forever.

She touched the mannequin’s mittened hand and, with what would have been inappropriate loudness had there been other people in the small museum, which there were not, said, “My name is not Texas.”

Her real name was. Texas. Now and always would be. She could, she must, go back to her god-given alias. “My name is not Texas, I’ve never lived in Montreal and I do know absolutely nothing about art.”

Paul-François stifled an impulse to laugh. A laugh not of mockery, but of instability, foreboding. He felt the way a roulette ball feels, losing momentum, knowing it is about to fall into the wheel.

Her colour-fast freckles appeared very pale, relatively. “My name,” she said, “is Sandra.”

“How are you, Sandra. My name is Paul-François.”

“But. I’m not a artist, an artist. And I’ve never even been to Bretagne. Brittany, I should say.”

She was not looking at him. On the contrary. She was squeezing the hand of the mannequin.

“So, Sandra, if you’re not from Montreal, where are you from?”

She wheeled around, taking the mannequin’s mitten with her, leaving his slender hand exposed to the bitter warmth. “Where?”

Gorgeous she was. Stunning.